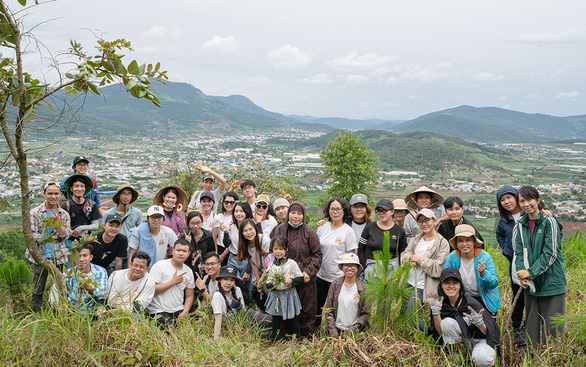 More than 50 young people from all over the country gathered on Bong Lai Hill, Duc Trong District in the Central Highlands province of Lam Dong to plant nearly 3,000 pine trees.

Each pine tree has been planted with the love and passion of the project founder and volunteers.

They hope that Da Lat will fight against increasing urbanization and recover its immense greenery soon.

During preparation before the important event, members had been excited to remind one another of the gathering on Bong Lai Hill.

The volunteers, who came from the Mekong Delta, central provinces or even from Ho Chi Minh City and Dong Nai Province by motorbike, reached the destination to carry out their plan on a recent weekend.

After spending two nights at Hue Quang Pagoda, on the morning of the third day, the team started trekking up the hill, which is around two kilometers away from the pagoda, to plant pine trees.

According to the project founder Loc, Bong Lai Hill is under the management of Hue Quang Pagoda.

The pagoda's female abbot is a nature admirer, whose dream of covering the whole hill with greenery has yet to come true due to a lack of money and manpower.

The hill is about 20 hectares wide, but only one-third has been covered with trees. The remaining area stays treeless with some places occupied for farming.

Loc and his volunteers then decided to plant pine trees on the hill.

After two days of hard work, the team managed to cultivate 3,000 pine trees.

Despite dirty clothes and tiredness, all members felt very happy with the wonderful result.

Nguyen Thanh Thanh, 33, who is working in Ho Chi Minh City, had caught a night bus with a friend to come and join the planting event on Bong Lai Hill.

As a fan of Da Lat, Thanh feels rather sad about its rapid urbanization as greenery is shrinking significantly.

He is afraid that the immense green space in the famous hilly city would disappear in the near future.

Taking part in the meaningful project, Thanh hopes that his contribution and volunteers’ would be able to inspire other young people and local authorities to launch more environment preservation projects like this.

Like Thanh, Nguyen Anh Dao, a 36-year-old nicknamed 'Gau U artist,’ had traveled from Ho Chi Minh City to Lam Dong Province to join hands with other volunteers, although Dao was busy with her job.

Walking around empty hills, Dao recognized the project of her team was still modest.

However, without any practical act, there would be no convincing messages sent to the community.

"It is really good for each of us to plant a tree at home," said Dao.

“In the long run, I hope that there will be projects helping local residents improve their livelihood without causing damage to forests.”

To appreciate the volunteers’ kindness, Dao gave each of them a chibi portrait bookmark to encourage them to participate in more environmental protection projects.

To have nearly 3,000 pine trees grown and all steps of the meaningful project carefully arranged, Loc went through many difficulties.

Loc found the beautiful city struggling with too many tourists while making a trip to Da Lat with friends two years ago.

To meet the demands of travelers, more and more green spaces were replaced with new projects. Besides, the city saw regular traffic jams and air pollution.

As the city was losing its distinctive cold weather while houses and buildings mushroomed, Loc did not dare to visit Da Lat again as he was concerned about causing further damage.

While working as a marketing employee for a company, Loc was in charge of a Facebook Page about Da Lat to attract travelers, on which he shared his straightforward criticism about things harmful to the city.

Although Loc went against the company's intention, Loc believed in himself and what he did because of his love for Da Lat.

"Instead of not traveling to Da Lat, I decided to act to show my love for the city,” said Loc.

"Several Facebook Pages administered by me have published many articles criticizing what has destroyed the soul of the foggy city,’ he added, referring to the well-known nickname of the city.

In addition, Loc was thinking about a project that could cause a significant impact on young people and raise their awareness of environmental protection. Thus, he launched the ambitious project ‘Xanh Lai Da Lat Oi!’

Loc went through many challenges in turning his idea into a reality.

He spent three months solving all problems related to the project by himself, including using his own money to travel between Ho Chi Minh City and Da Lat to find a tree planting location, dealing with legal issues, and finding sponsors.

However, he received no feedback after pitching his project at around 20 sponsors. Some even rejected it, saying that it would be very difficult to carry out.

Loc encouraged himself not to give up. Without any sponsor, he decided to shift to crowdfunding on Facebook.

It took him by surprise as for only four weeks, Loc and four young volunteers raised enough money for making his dream come true.

After seeking for more information and thanks to a little bit of fortune, Loc could find out an affordable way to carry out the project at a cost of more than VND40 million ($1,725).

Among the donors, who belong to the 'Da Lat Admirers Community,’ were some foreigners.

Currently, watching the hill that has been covered with pine saplings, Loc still feels like he was in a sweet dream.