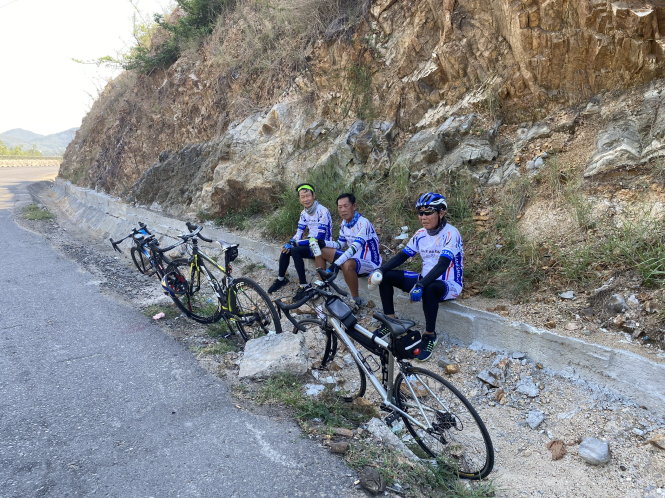 Four months ago, three sexagenarian men grabbed their bicycles and embarked on a 6,000-kilometer itinerary across Vietnam.

Their journey was cut short at a mileage of 2,500 kilometers, but every moment of it was worth the try for the trio.

Initially, they planned to reach Hanoi after one month before heading to the northern coastal city of Hai Phong and biking westbound along Vietnam’s northern borderline.

In the final lap, the group would return to Hanoi before proceeding to the south on Truong Son Road and wrapping up with a trip across the Mekong Delta.

Bike tours of such a distance within Vietnam have never been seen before, not least when the conceivers are only biking hobbyists rather than professional bikers.

Son has retired after a career in the electricity industry while Cuong works as a medical practitioner.

Meanwhile, Thien has just stepped down from his position as board chairman at a real estate firm to fulfil his yearning to travel.

As the president of the cycling club LandSaigon, Thien is also the one who envisaged and coordinated the trip.

“Others on the board of directors [of the company] expressed concerns when I announced my retirement," Thien said.

"They asked me to keep the position, then I could bike to wherever I wanted as long as I could return once a month to Saigon for the board meeting.

"But I turned down the offer since I would not be able to work well with that [schedule].

"I also want to devote all my time to the journey.”

Before planning for the trip across Vietnam, Thien and his cycling team had already gone on many long-range routes – namely Ho Chi Minh City – Hanoi in 2009, Vietnam – Cambodia – Thailand in 2015, or a tour through seven northern border provinces in 2017.

His 6,000-kilometer journey this time comprised all the challenges that he had faced in all the previous trips.

“Our trip from Saigon to Hue was the most enjoyable one since the road was pleasant to bike on, the weather was nice and our stamina was still up," Cuong recounted.

"It became challenging when we reached the south-central region and onward.”

“The rainy season is due in June and July so rains and heatwaves are expected.

"Yet the most intimidating thing was cycling through the hill passes during severe blows."

Out of the three, Cuong is the least experienced since he had only practiced cycling regularly for about a year and had not gone on any long trip before.

“Thien and Son had more experience cycling on hilly roads, so they knew the right formation to reduce wind resistance, plus optimal strength distribution skill. I would not have triumphed over these hills had I biked alone,” Cuong said.

As the trio went deeper to the north, the passes turned more winding with their twists and turns, while their health issues also came up as another obstacle.

In just a week in late July, the team traveled non-stop through a handful of provinces and cities, including Hai Phong, Lang Son, Cao Bang, and Ha Giang.

During this time, Thien’s underlying condition of diabetes started to emerge.

“Prior to entering the key pass Ma Pi Leng, I suddenly fell sore all over my body," Thien recollected.

"After an MRI [magnetic resonance imaging] scan at the hospital, the doctor diagnosed me with sacroiliac joint effusion and advised me against any cycling activity.

"I was no stranger to these situations as my medical history is filled with skeletal problems, and I knew that I had to quit cycling for at least a few months.”

As the leader had to tap out for injury while the two others also suffered from body ache and familial pressure, they had no choice but to cancel the ambitious expedition halfway through.

Despite not reaching their goal, the three gave rise to a one-of-a-kind circumstance among the cycling community of Vietnam with their trip through 15 provinces and cities.

For the cyclists, after a streak of successful conquests, they were finally faced with their own human limits this time.

“For my first trip from Saigon to Hanoi 11 years ago, my family also raised many concerns and doubts," Thien confessed.

"Yet I overcame all these challenges, and my confidence was then inflated.

"It was not until this time that I realized my own limits.

“At this age, it is hard to pursue a month-long trip. For the next occasions, I will probably have to divide the laps and take smaller steps toward the goal instead of taking more than I can bike.

“Biking on the Truong Son route is a must in my to-do list."

Mulling future adventures, Thien said he will try out cycling treks, which means loading all his belongings on the bike instead of relying on a porter car like before.

A penchant for thrills and sport achievements is only half of his motivation to bike – Thien has a heart for the off-the-beaten-track scenery of Vietnam.

Each expedition is an opportunity for him to gain new perspectives on his country.

“I have traveled to many countries in the world, yet I never get tired of seeing Vietnamese landscapes," he said.

"I don’t think there is anyone who can claim they have visited every corner of Vietnam.

"The more I've visited, the more I was amazed by the breathtaking scenery of our country.

“During my trek along the northern border, I had the chance to experience two out of the four grand passes of Vietnam [Ma Pi Leng, O Quy Ho, Pha Din, Khau Pha].

"The views there stand head-to-head with the best of nature in Europe.”