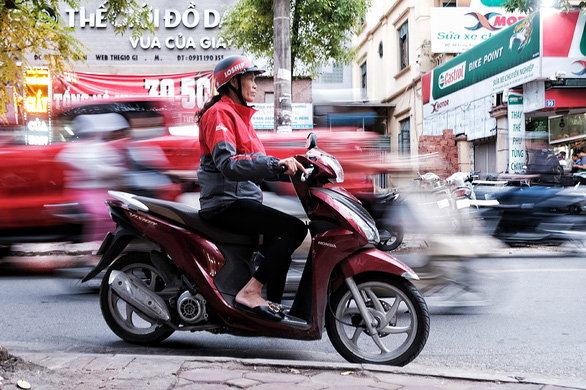 It is not really a challenge of gender stereotypes but a number of women in Hanoi and Ho Chi Minh City have excelled as delivery workers, at the expense of their looks, and even take pleasure in their job despite facing grueling hustle on a daily basis.

Lured by tempting offers and a low barrier to entry, 'shippers' — the localized term for motorbike delivery workers in Vietnam — are scrambling to work for food and package delivery apps.

The physically demanding job, which involves hours of riding a motorbike through dense traffic and even making haste for several kilometers for a timely delivery, has been traditionally the domain of men, but it is no longer the case now.

Livelihood at the expense of health and looks

During a persistent morning rain, Tran Thi Thu Ngan was parking her bike opposite a bubble milk tea shop at a corner of Nguyen Thi Minh Khai and Mac Dinh Chi Streets in District 1 while checking her phone for new orders.

The corner, located near beloved diners and coffee shops, is one of the shippers’ hotspots.

Ngan was the only woman among nearly 10 delivery workers waiting there that morning.

The 21-year-old girl, who left her hometown in the south-central province of Phu Yen for Ho Chi Minh City two years ago, worked as a food attendant at a restaurant before being made redundant as the novel coronavirus pandemic (COVID-19) hit Vietnam in March.

Responding to the surging coronavirus-era consumer demand which has stoked orders, Ngan switched to delivering food for an app-based platform to make ends meet.

“I opt for food delivery over being a motorbike taxi driver for safety reasons. Besides, people tend not to trust female drivers,” she shared, adding she would not waste a minute if a new order pops up.

Ngan’s daily grind begins at 10:00 am with turning on an app, via which delivery jobs are offered to riders like her, and waiting along streets lined with eateries and coffee shops.

Her deliveries are restricted to inner-city areas, mostly District 1 and District 3.

“I always try to reach the targets, or I cannot support myself and provide for my younger sibling at home. I’m so happy when I sometimes receive tips of VND5,000-10,000 [$0.4] from clients,” Ngan said, noting the influx of new riders who are workers in different sectors driven to unemployment by the country’s COVID-19 outbreaks brings about fiercer competition.

She revealed shippers’ most hectic time are noons and evenings.

There are downsides, however.

Like most other shippers, Ngan is not exempt from encounters with grumpy customers when she arrives late after pushing her way through the heavy traffic during rush hours or getting lost.

“I always cover myself with masks and jackets so that no one knows who I am. It is indeed arduous for girls being exposed to the weather, my complexion has greatly darkened these days,” she shared, having her fingers crossed she will settle down with a more stable job after the pandemic is over.

Rain or shine, Le Ngoc Lan, originally from Hanoi, exerts herself to deliver 22 orders per day to different areas of Ho Chi Minh City since she took on the job more than one year ago after quitting her market research work at the age of 43.

Unlike Ngan and many female colleagues, Lan does not find the job grueling.

“There’s nothing to feel ashamed of if one works as a shipper. I opted for the job partly because I love hitting the road just as a backpacker does. The schedule is also flexible and there is less pressure than a 9-5 job,” she said.

“As long as you can endure and put in the work, the job will earn you money."

There are occupational health hazards, however.

The middle-aged woman was involved in an accident on her way to deliver an order a few months ago, which kept her off the road for four months.

Once back on track, she wasted no time resuming the job to survive in the city and indulge her backpacking preference.

The rainy spell is her favorite time, as she can secure more orders after many other shippers call it a day.

“The number of my hourly orders almost doubles to three or four orders in the rainy weather compared to an average of two. I try to look on the bright side, there are times I’m even hooked on it,” Lan confided.

Lan also shared her heart-warming moments, saying most of her clients had acted nicely so far.

“Once when I was on my way to make a delivery, a customer texted me, saying there was no rush and I should take shelter from the torrential rain. They also gave me a small tip when I arrived,” she recalled.

“I was overjoyed then, I felt I got their appreciation and sympathy."

As soon as she gulped down a piece of bread bought in the morning for a quick meal, her phone sent a notification for a new order: her 13th of the day.

She quickly put on her raincoat and vanished into the traffic to reach a broken rice eatery two kilometers away.

Only after she handed the serving of broken rice to her customer did she spare some minutes to open up about the job.

Duong, who began working as a food delivery worker last year, manages to reach 20 deliveries and 28-30 ones a day on rainy days in inner-city areas.

She revealed many of her customers were quite surprised receiving the food from a senior shipper.

The woman shared the job not only helps her cover daily expenses instead of relying on her grown-up children’s allowances but also relieves her grief over the death of her husband.

“Seeing many young food delivery workers at work, I just decided to give it a try,” Duong said, adding her employer initially showed reluctance in hiring her as a contractor.

To her great delight, she got her first-ever order.

The joy was short-lived, however, as she soon found herself a victim of a no-show customer.

“I covered more than 10 kilometers from a shop to a client’s house and made 20 phone calls only to receive no answer. I froze and cried,” she recalled.

Apart from no-shows, the woman faces other risks: traffic accidents.

She was lucky to survive a car crash but suffered serious damage to her bike.

Despite the occupational hazards, Duong was positive she will pursue the job for as long as her health permits.

“The job allows me to get around and meet many people. People on the app call us ‘warriors’ instead of ‘shippers’," the 57-year-old said.

“Every time I turn on the app, I feel as if I were a real warrior.

"I’m sometimes amazed at the extent I can exert myself to.

"The job keeps me mentally strong and bouncy,” 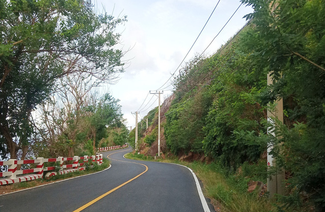