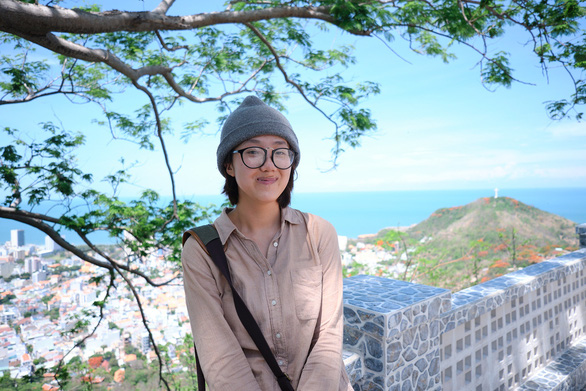 No matter what challenges her disability might bring, Nguyen Thi Nga, an emerging book reviewer known for profound writings on social media, has stood strong against bullying and condescension, ready to fight for her dreams.

Nga, from Vinh Phuc Province in northern Vietnam, is better known as Tue Nga, the pen name she uses for her book reviews which have amassed a substantial following on Facebook, YouTube, and TikTok.

The 22-year-old girl made a strong impression during a program organized in 2020 featuring those who had undergone plastic surgeries to remedy congenital disabilities.

People can easily recognize Nga by the bright smile that she always wears, and her optimism and agility that have built up after all that she has gone through.

Nga shared she has grown to come to terms with her sorrows, or ‘rainy days’ that began in her childhood, so she can now better savor ‘sunny days.’

The young woman was told by her mother that her family had tried to seek an alternative cure for a hemangioma, a benign tumor made up of blood vessels, that began to grow in her mouth a few months after birth.

The infant did not escape the serious complications from the alternative treatment, whose effectiveness is yet to be proved by scientific evidence.

Her upper lip was left permanently damaged and disappeared altogether with the tumor.

The young girl then had no idea that she would face a long struggle against her own feelings about her appearance and the harassment because of the congenital disability.

Long-term effects of her condition would go unnoticed until school age, as this was when she herself started to notice that her lip looked different than that of her peers.

“Once, I got a good beating from a boy," Nga sadly recalled.

"I went to school with bruises all over my face for the whole week."

The pain persisted well into middle school, where the girl would sit in her class with her facial mask on.

She even burst into tears when the teacher lectured on phenotypic variation during a biology class.

When she entered high school, she chose to stay away from people instead of fighting back, hoping that would keep her out of trouble.

Things did not get any better, however.

What depressed her the most was that no one would reach out to help her with issues related to harassment or socialization.

"I would be met with a barrage of attacks like getting stubs of chalk and punches in my face.

“I even wished I had not been born.”

As Nga would wind up spending the majority of her childhood lonely and being deprived of friends, she found solace in reading early as she entered the third grade.

She said she found in books a place for her to let it all out and a source of courage that helped her fall seven times and stand up eight.

The importance of reading began to sink in.

“Reading is so captivating. I find myself going through a wide spectrum of emotions,” Nga shared.

Thanks to reading, over the years Nga started changing herself from a social outcast to one that embraces heartwarming support and accepts the amount of hate being unleashed upon the girl.

Despite feeling an inferior complex over her different look from time to time, the young girl has come to realize the unconditional love of her family and some people out there can help her through anything.

“Since I began keeping things in perspective, the situation has picked up," she said.

“I’ve learned how to accept the way I am and forgive those who hurt me, though it was not easy at all."

In April last year, Nga found herself among the many young people made redundant amidst the first COVID-19 outbreak in Vietnam.

Not letting her time go to waste, she decided to tap into her childhood reading hobby and began to review books on Facebook, YouTube, and TikTok.

A skilled reader, she can finish four or five page-turners in one week.

With her reviews ranging from psychology to how-to books, Nga shares the lessons she has drawn from what she reads with other book enthusiasts through video clips and short writings.

Her Facebook page, under the user name of Tue Nga, has attracted more than 18,000 followers.

“Reading does good to our brain and helps change our world views, which I believe will make you happier and distract you from going after materialistic values,” Nga wrote in her video clip reviewing a well-known book by Japanese author Takashi Saito.

“I feel happy and free now.

"Setbacks all have their own meaning,” she shared about how to stay in high spirit and avoid being reduced to tears by negative comments.