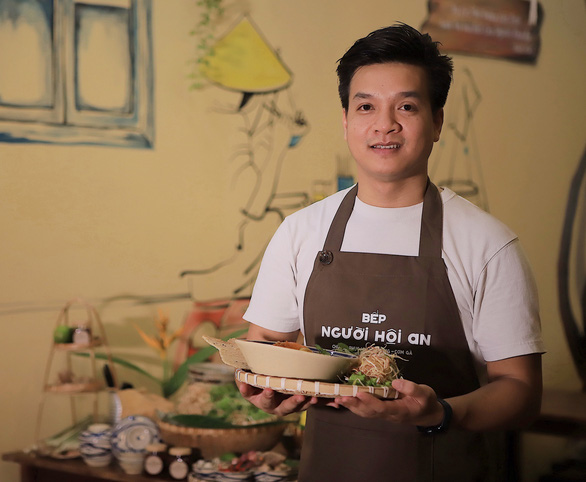 Much to his family’s objection, Nguyen Han Thien took it upon himself to quit his high-paying IT job and opened a restaurant in Ho Chi Minh City, serving iconic dishes from his hometown to realize his childhood dream.

Bidding farewell to his well-paid information technology job at three different companies, including one reputed IT group he had worked for nearly 10 years, Thien charted a new direction for his future and invested his savings in opening a bistro.

He is now the owner of Bep Nguoi Hoi An (Hoi An Kitchen) restaurant in Ho Chi Minh City.

The only and hottest items on his restaurant’s menu are com ga (chicken rice) and mi Quang (noodle served with shrimp, pork, peanuts, and banh da nuong, or grilled rice paper wrapper), the specialties of Thien’s hometown in the central Vietnamese province of Quang Nam.

His restaurant all comes down to Thien’s childhood dream, long-cherished passion for cooking and his years working as a busboy for his mother, who had been running her eatery with the special noodle soup for decades.

Thien, along with his siblings, grew up on earnings from his mother’s eatery while inheriting her sense of detail and infatuation with their hometown’s hallmark soup.

Until now, the man remembers the extra care he took in boiling water on the wood stove for hot, fragrant tea, the drink commonly served to diners.

During his college years, he again found himself immersed in a culinary world centered around delicacies from the central Vietnamese region when he stayed with his distant uncle, whose restaurant made quite a splash in Nha Trang City, a coastal town in the south-central province of Khanh Hoa.

Thien said what he had observed and picked up during that time was just what he needed to turn his childhood dream into reality.

Upon graduation, the young man headed to Ho Chi Minh City, where he landed a financially rewarding gig in information technology, a perfect fit for his college major.

For nearly 10 years, he worked at three different companies, including one big IT group, and won awards for outstanding performance.

Though his office work brought security and a good income, part of him craved change, as the man always dreamed of the day when he could run a restaurant of his own.

Seeing that the iconic dishes from his hometown would become fixtures in the southern metropolis, he bravely quit his job and opened his dream restaurant after meticulously weighing the pros and cons of such a career move.

The man was determined to show how his resolve to pursue his dream has ever grown stronger.

He stood his ground firmly as his mother fiercely rejected his plan to leave the office for a risky venture and all the hard work that would lie ahead.

“The last thing I want for my son is dipping his toes into the restaurant industry and experiencing all the hard work I’ve been through,” said Hang Thi Tam, Thien’s mother.

Without formal training in the hospitality sector, Thien began working out his own formulae and seeking reliable procurement sources, making sure the ingredients and packaging are of high quality and environmentally friendly.

His eatery uses paper packaging instead of single-use plastic boxes.

“The restaurant is funded by my savings from my previous working years," Thien shared.

"When the time came, I quit my IT job to focus solely on my current business.”

The enterprising man is already on his path, sparked by his long-cherished dream, with his restaurant now bringing in enough cash for him to feel financially secure.

But it was not an easy start, especially when his inauguration came during the social distancing period, which was in place in the metropolis and other localities to curb the spread of the novel coronavirus disease (COVID-19) outbreak last year.

During the low season, Thien’s eatery became a haunt of poor laborers whose livelihood was disrupted by the social distancing measures.

They came to the eatery to receive gift packs of necessities, with the fund donated by Thien himself and his like-minded friends.

Thien is no stranger to charity work.

For the past several years, he and his group have prepared gratis meals for inpatients and their caretaker relatives at local hospitals on a regular basis.

Whenever he had no time to spare, Thien made donations to support his group’s good deeds.

His eatery has successfully tapped into takeout and online ordering business to cope with the resurgence of the COVID-19 pandemic since its opening more than one year ago.

Business is currently good thanks to online food shopping and delivery amid the country’s fourth and most ravaging outbreak.

In pursuit of more consumers, Thien has made the most of his IT expertise and SEO techniques to make sure his restaurant and dishes always come first on search engines.

“My restaurant is raking in profits and I no longer have to offset losses as we did during the first few months.”

Thien’s eatery is also frequented by many of his friends.

“Thien’s restaurant attracts customers not necessarily for its good food, but rather for his dedication and eye for detail,” noted Du Tran Nhat Quang, from Thien’s charity group.

“His attention to detail is clearly seen in his sophisticated interior décor, which reminds us of Hoi An Ancient Town, and the extra mile he goes to in preparing the delicacies.

“The place is also a haunt of friends."

Spurred on by this success, Thien even dreams of going ‘large scale’ and stretching far and wide.

“As my childhood dream is taking shape, I’m charting a new direction for the future,” the former IT engineer shared.

“I’m thinking of opening a chain of eateries in Ho Chi Minh City, offering a range of delicacies from my hometown."