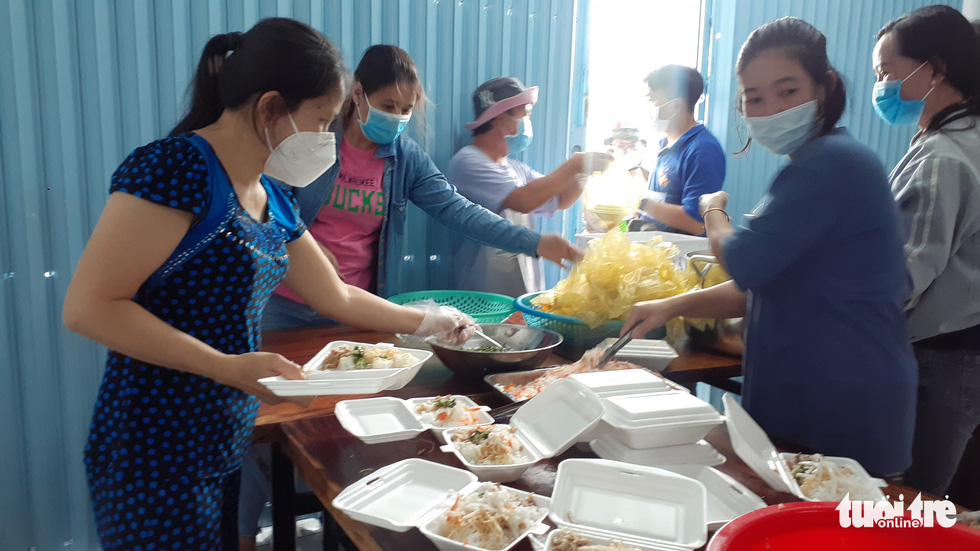 A ‘rice ATM’ and charity groups offering free meals have emerged recently in Long Xuyen City in the Mekong Delta province of An Giang to give support to people in need.

On July 13, the ‘rice ATM’ at My Binh Ward, Long Xuyen City was relaunched after a brief pause, giving free rice to households, ticket vendors, and hawkers, who lost their jobs because of the COVID-19.

The Vietnam Fatherland Front Committee in My Binh Ward has enlisted needy households eligible to receive free rice and given them rice tickets.

When coming to get the free rice, the locals would submit the ticket, sign their name, and then 'withdraw' 3.5 kilograms of rice each time.

Tran Thi Kim Dung, 61, a resident with an adult son who has lost his working ability in Binh Long 2 Hamlet, My Binh Ward, was furloughed during the COVID-19 pandemic. Therefore, rice, among other food items, is the most necessary for her.

“I work as a garbage collector, but I had to stay home during the period of social distance,” Dung said, crying.

"We can temporarily overcome the suffering now thanks to the rice portion.

"While others can get free rice once each week, I can get two times due to our poverty-stricken situation.

According to Nguyen Hoang Tu, vice-president of the Vietnam Fatherland Front in My Binh Ward, local authorities distribute 227 tickets of free rice weekly.

The poor can go to get free rice every Tuesday and Thursday. They intend to expand the list in the hope of supporting more impoverished people.

“There are around 9,000 households that have been supported with 17 tons of rice since the rice ATM in My Binh Ward was launched,” said Tu.

“The rice ATM was financed by the Vietnam Fatherland Front Committee in the ward and some donors."

Apart from the 'rice ATM,' a restaurant offering free meals at a cost of just VND2,000 (nine U.S. cents) apiece has been open for more than one week on the street of Thoai Ngoc Hau, My Long Ward.

This is an initiative launched by donors in Long Xuyen City, arranging for volunteers to deliver meals directly to the pandemic-affected people.

There were so many people rushing to obtain meals that the restaurant had to temporarily shut down. Until they could eventually maintain social distancing properly, they could not continue to receive the meals.

According to the restaurant’s owner Le Hong Hoa, they have delivered over 1,000 meals since July 8.

On the opening day, the restaurant served 200 meals at the same cost of VND2,000 for both vegetarian food and food with meat.

Each person can buy a maximum of two meals.

“We serve on Tuesdays, Thursdays, and Saturdays, from 10:00 am to 12:00 am. We plan to serve every day when we have enough staff,” Hong Hoa told Tuoi Tre (Youth) newspaper.

“We hope that this can share a little bit with the poor during the social distancing period."

On July 13, the charity group of Lang Thang An Giang, which is also based in the Mekong Delta province, brought seven cash gifts with various values to visual-impaired individuals. The gifts, fetching VND4-6 million (US$174-261) were delivered depending on everyone’s specific situation.

On top of the cash gifts, the recipients were supplied with rice and necessities previously because of their massage parlor’s shutdown.

Since July 19, along with 18 other provinces and cities in southern Vietnam, An Giang has been placed under Directive No. 16, a COVID-19 prevention measure that requires people to remain home except for buying necessities, such as medicine and food.

Before the directive, various restrictions implemented to prevent the respiratory disease had left many people unemployed.