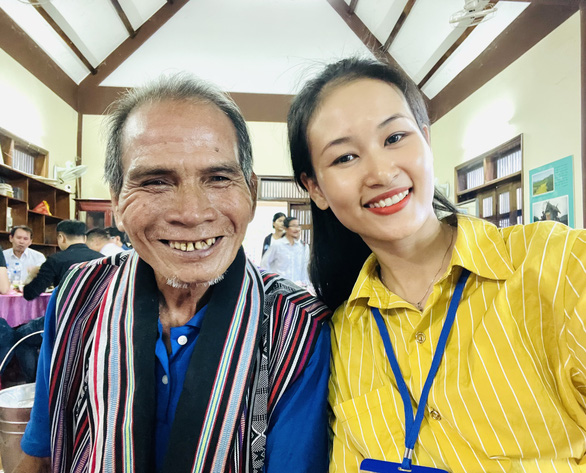 Woman makes popular destination out of remote village in Vietnam

A village in central Vietnam experienced a dramatic change thanks to the efforts of a young woman. It now attracts a large number of tourists and is widely renowned among travelers.

The place was then a remote destination inhabited primarily by the elderly.

After five years, Kieu helped to transform the secluded community and she is much loved by the villagers today.

According to the woman, her youth was well spent because it unlocked the potential of the people here.

Now they can make a living out of their own homeland in central Vietnam.

As part of her plan to promote Go Co Village, Kieu acted as a tour guide for travelers in the nearby An Khe swamp, where the ancient culture of the Sa Huynh people was found, followed by the civilizations of the Chams and the Dai Viet country.

Despite a mere five years working in the area, she built for herself a thorough understanding of the land.

“The An Khe swamp measures 347 hectares in water surface area,” she introduced.

“The longest side reaches 3.5 kilometers and the widest one kilometer.

“According to geologists, this swamp came into being after the Flandrian interglacial around 6,000-7,000 years ago, and became a freshwater swamp roughly 3,000-4,000 years back.”

A large variety of heritage sites from the Chams can be found in this village, like the Cham ancient well, a tombstone in Cham style, and a stone-based irrigation system.

All of these indicated a wealthy Cham community.

However, the Dai Viet people took over the place and became its new owners.

Ai Thi, a tourist from Dong Ha City under Quang Tri Province, wondered, “When the Dai Viet people attacked, why did the Chams leave and not fight back?

“It’s curious that now their heritage is still around.”

To avoid warfare, the Chams and the Dai Viet people held a bridge-building contest, and the winner would be the new owner of the land.

“The Chams were confident in their crafty stone bridge design, but the Dai Viet finished first with a wooden model,” said Kieu.

“Losing the competition, the Chams had to abandon their homeland.

“This legend could be true because geologists discovered a stone bridge unfinished beneath the An Khe swamp.”

The path from An Khe to Go Co boasts a 100-hectare land of cultural values.

From Kieu’s accounts, she was lucky to be on a 2017 UNESCO trip to this area as they needed to examine the Sa Huynh cultural hub to qualify it as a world-recognized heritage site.

After this first time to the village, she decided to linger on as she was deeply intrigued by the richness of the heritage here.

The determined woman visited each household and persuaded them to join her community tourism project.

Nevertheless, the local villagers believed that Go Co was an off-the-beaten-track destination and basically unknown to anyone.

They rejected Kieu’s proposal, saying they had grown fed up with the stones that surrounded their lives.

“At that time, the villagers were predominantly old people and young children,” she recollected.

“It was impossible for any tourism plans.

“We were stuck, but with such potentiality, I believed it would be ideal for community tourism.

“They would earn so much from their own little-known village.”

To make sure her dream would come true, Kieu invited the villagers on a tour with her to Cham Islands in Hoi An City under nearby Quang Nam Province.

The eye-opener tour provided the elderly with a more positive mindset and their faith in tourism sprouted.

Concerns about operation and funding by the locals were properly addressed by the enthusiastic woman.

“Community tourism has to be based on the very potential of the community itself,” Kieu said.

“They provide what they have.

“There is no need for investment in homestay facilities.

“Each and every member contributes to the power of the whole community.

Interestingly, the elderly men and women in Go Co were eager to better their skills in providing tourism services.

They visited Cham Islands and observed how things were done.

Gaining sufficient insights and experience, they came back and changed their own homeland.

The villagers rearranged the rocky fences, the ancient well, cleared the paths to hills and mountains, planted more woody plants, and renovated their houses in order to welcome visitors.

Three months after Kieu’s visit, the first tourists came amid the villagers’ surprise.

The first earnings from tourism were unforgettable.

In 2019, she encouraged the people to form a Community Tourism Cooperative.

She acted as the director of this cooperative and took charge of web design, Facebook page administration, contacting travel agencies, booking tours, arranging personnel according to their functions, and forming teams of tour guides, cooks, traditional singers, and fish farm service staff.

In 2020, Go Co was recognized as a three-star tourism village as per the One Commune One Product program.

She admitted that she had unknowingly lived amid valuable heritage her whole life, and now she is determined to make the most out of it despite her old age.

“Nobody knew my village before and no one ever came,” she said.

“Now the village is way different. Tourists are flocking here.

“There are so many of them that we have to reject some due to over bookings.

According to Kieu’s plan, the village is on its track to be labeled five stars. The place not only has its inner power, but a lot of immunity as well.

It can self-adjust in the face of negative impacts on the values of the village.

The people take good care of the scenery, while maintaining the ecosystem and the thousand-year-old heritage.

Despite being the current director of Go Co village, Kieu plans to leave it soon and will hand over the management to the local people once the village reaches five stars.

She will then locate other villages and retell the story of a village transforming itself.

Teng Village in Ba To District, Quang Ngai Province is one of Kieu’s future spots.

This is home to a special fabric product by the H’Re ethnic people and is good tourism material, which has never been tapped.

Gratitude to the woman

Huynh Thi Thuong, 68, said that thanks to Kieu’s youthful strength and intelligence, Go Co can be what it is today.

This village makes it on the news and on national TV networks, which has rendered it basically known throughout Vietnam.

People think of Go Co differently now, and the authorities of Duc Pho Town are proud of it.

“A few years later, our children can get back to their hometown to side with the elderly in these tourism projects and live an affluent life right where they were born,” Huong said.

“They will no longer have to live far away from their homeland.”

The cultural heritage is conveyed via community classes, while trash is properly disposed of, making a well-protected environment.