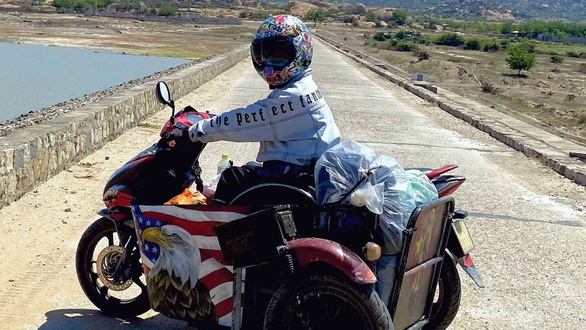 Phan Vu Minh lost his legs at the age of 20 due to a rare medical condition, but has refused to let his disability slow him down. He now spends his time exploring Vietnam on a specially designed motorbike.

Minh was diagnosed with spinal blood vessel deformities when he was 12.

Despite spending eight years preparing himself for an uncertain future, the news opened the door to depression.

According to the doctor in charge of his case, Minh was the second person in the whole country to have been diagnosed with such a rare medical condition.

Minh has refused to let his condition and the resulting amputation confine him to a wheelchair.

A long-time Ho Chi Minh City resident, Minh felt he needed a reprieve from the world and decided to relocate to Vinh Long City in Vietnam’s Mekong Delta region.

In Vinh Long, the now-27-year-old locked himself away, abandoned his studies, and began what he thought would be a wheelchair-bound life.

Eventually, however, Minh began to emerge from his depression.

He opened a florist's and, after starting off selling just roses, now sells all sort of flowers and plants.

He spent seven years as a florist and, although his depressive thoughts still plagued him, he pushed through.

“I had to calm myself and try to lighten my mood before each of my physical therapy sessions. That was the only way to get to the point that I could take charge of my own life,” Minh said.

“Eventually, I started to feel better and began imagining what it would be like to travel. ‘How could a person let a wheelchair dampen their dreams and aspirations,’ I thought.”

Refusing to let his dreams die, Minh modified his motorbike into a motorized trike and outfitted the contraption so that it would be suitable for cross country-trips.

He now uses it to travel up and down Vietnam, spending months on the road and taking in the country’s beautiful scenery.

“My first journey was to Bac Lieu Province [in the Mekong Delta]," he said.

“It was a short trip just for me to gauge how much effort it would take to travel and whether I was actually able to do it.

“It also eased my parents’ fears. After that trip, I traveled to Hue, Da Lat, Binh Dinh Province, and Phu Yen Province.”

The largest obstacle Minh faces on his trips is the weather. Due to his severe lack of flexibility compared to able-bodied people, it can be difficult for Minh to maneuver his three-wheeled motorbike when conditions get rough.

Also, due to prolonged sitting during his long-distance journeys, he occasionally develops sores.

To avoid these obstacles, Minh now divides his trips into small journeys, and the pay-off has been a time of joy, comfort, and self-discovery.

Those who got to meet him and hear his life story wished him good health and stamina for the challenging journeys ahead.

Many say his story is inspiring.

Minh gets his own motivation from others who have gone through situations similar to his.

One of these people is Yusuke Terada, a Tokyo resident who often takes long journeys in his wheelchair.

Another is Chinese national Quan Pen, who lost both his legs at age 17 following a spinal tumor injury and has also traveled his country.

“I have been to many places, but my trip to Dak Lak was particularly memorable. It was coffee season!” Minh said.

“The white coffee flowers were blooming everywhere, sending off a powerful aroma and surrounding me in the beauty of nature.

“The local people were also extremely friendly, so I really want to be back here again.”