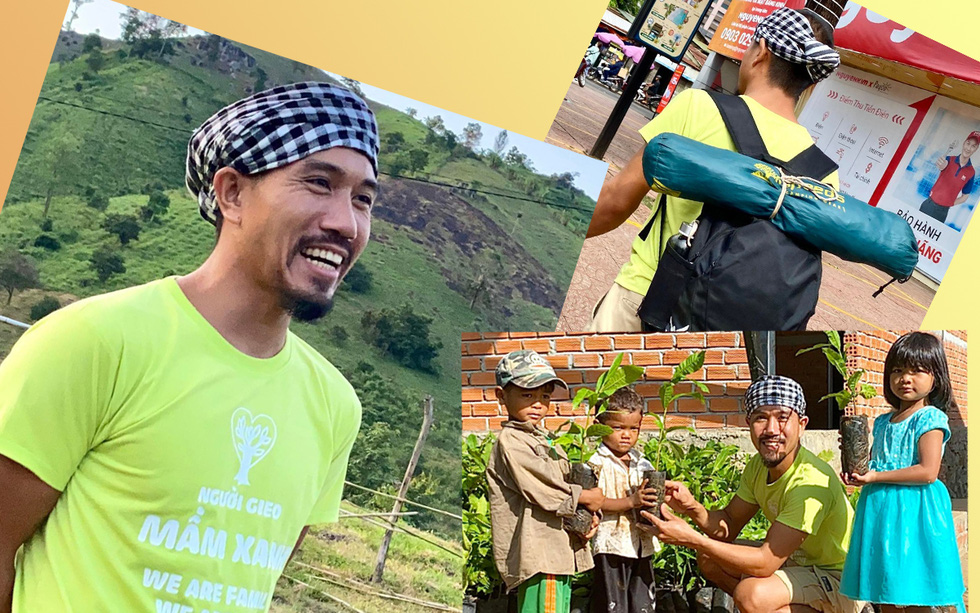 After backfilling dirt round the roots, Long watered the plants and smiled in satisfaction.

The Hanoi man has been pursuing a green journey to numerous parts of Vietnam for six months.

“A journey for my desire to green not only barren lands but also everyone’s mindset,” Long underlined.

Setting the stage for a green journey

Many years ago, when traveling to the northwestern region, he saw tree cover shrinking and residents abandoning their farmland to land another job, Long recounted.

It was a decrease in natural forest cover that prompted him to embark on a walking trip to regrow lost forest and spread such a meaningful action.

Anh, 62, who is one of Long’s acquaintances, threw his support behind the latter’s plan.

“Anh did encourage me and accompanied me on the journey,” said Long.

In contrast, his family members and friends strongly opposed his idea.

As a result, he decided to fly from Hanoi to the northwestern region, and then started his trekking tour for a greener nation.

To increase his strength and endurance, within a month before his journey, Long went for a five-or-10-kilometer run every day.

Long and Anh flew from Hanoi to Can Tho City in the Mekong Delta region, and then took a coach to Ca Mau Province. Their green journey began at the southernmost point of Vietnam on March 8.

Bringing a backpack and a tent with him, Long was wearing a green T-shirt printed with the words 'Green Journey' and the image of a shoot.

Everyone calls him 'a man in green.'

The duo bought multiple seedlings and brought them to the headquarters of the provincial and municipal governments along the roads to grow them with the authorities’ permission.

The trees would be carefully taken care of at the headquarters, while the sites would make the message of greening the country take root.

“I was so surprised to see Long bring a seedling to the headquarters. I strongly put my weight behind his meaningful action, which helps spread public awareness of planting trees and protecting the environment,” said Huynh Thanh Dam, chairman of the government of Rach Goc Town in Ca Mau Province’s Ngoc Hien District.

The tree planted by Long in front of the offices is developing well.

“In Soc Trang Province, I met a group of Khmer people. They initially prevented me from growing trees as they thought my trees could produce pests," said Long.

“However, they finally allowed me to green the village after being convinced.”

During their journey, they also collected scrap along roads as the action helped clean the roads, while the proceeds from the scrap sale could be used to buy seedlings.

“I wanted to make my journey more meaningful in a way to transition scrap to green trees,” he shared.

Once he collected a full bag of scrap, but did not find a scrap purchasing store. He had to carry it on his back for tens of kilometers.

Long is continuing his multi-provincial green journey, while Anh must stop in Phu Yen Province, located in south-central Vietnam, to return home for personal reasons.

One of the biggest challenges facing Long on his green journey was traveling expenses.

During his arduous journey, he sometimes had feelings of happiness.

While he was growing a tree on Phu Quoc Island off Kien Giang Province, he met a boy from Hanoi who was going on a tour with his family.

The boy gave his life savings to Long so that the 'man in green' could buy more trees.

Long has been staying in Dak Lak Province for two months.

He and a local charity group bought 5,000 cashew, custard-apple, and durian tree seedlings to grow them in the Kieu mountain village in Yang Mao Commune, Krong Bong District.

Pointing to a piece of hill in front of his house, Y Ma Dinh happily said, “I have planted 100 custard-apple trees and 100 durian ones. I hope they will thrive fast and yield fruits so that I can sell them for a living.”

Ma Dinh is said to have changed for a positive attitude as he daily comes to the piece of farmland to root up weeds and take care of his trees at dawn, and waters the trees in the afternoon.

He is no longer drunk all the time.

Early on weekend mornings, Y Men Ksor and Long dug holes to plant Taiwanese terminalia catappa trees and Thai jackfruit on a piece of farmland in front of a library.

Y Men recalled that when Long arrived in the village, he visited all places there and called on residents to plant trees to increase tree cover and make them economic.

Y Men and many locals were totally convinced by Long.

After one month of staying in the Kieu mountain village, Long traveled to Buon Ma Thuot City in Dak Lak Province for work to refill his wallet for such a long green journey.

“After the summer holiday ends, I will ask some schools to grow trees to spread awareness of greening surrounding areas among students,” Long said.

He hopes tree planters can see the benefits and incentives in the future.

“Many residents want to grow perennials, but financial woes only allow them to plant annuals and harvest them for a living," Long said.

"If they receive benefits from planting, they will do more to protect forests and increase green coverage.”