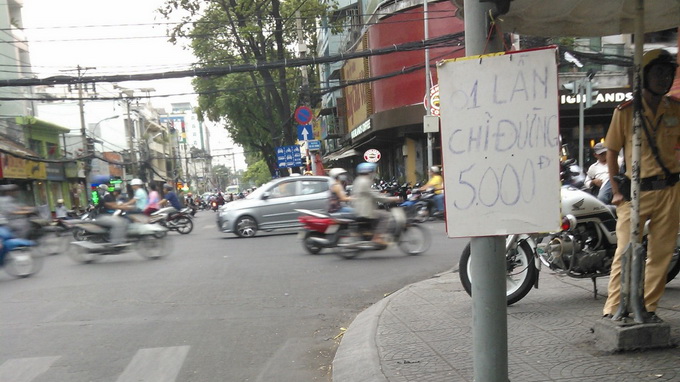 Asking for directions in Ho Chi Minh City may cost you nearly a quarter of the dollar now and this is not a joke.

A sign has recently been hung up at one of the busiest intersections in the city, whose citizens are widely known for their helpfulness and generosity, saying one has to pay if they want to know which way to go here.

One of the passers-by, stunned to see the sign on Sunday, took a photo of it and later sent to Tuoi Tre newspaper.

“Giving directions: 5,000 dong a time,” reads the sign, hung on a traffic light pole at the Hai Ba Trung – Vo Thi Sau intersection in District 1. The suggested fee is equal to 23 U.S. cents.

Asking for a direction is not uncommon in big cities like HCMC, but charging the askers is apparently an unprecedented act.

“Normally, most of those being asked will enthusiastically give directions, but to do it for a fee is not friendly at all and that should not happen in a city known for its friendliness like HCMC,” the photo author wrote to Tuoi Tre.

Free-of-charge services offered to those in need have become increasingly common in the southern city over the last few years.

Street peddlers, xe om (motorbike taxi) drivers, scrap collectors and others who earn a livelihood out of the streets can drink iced tea for free from the buckets placed throughout the city, or have lunch at less than 50 U.S. cents at charitable eateries.

Some repairmen are also willing to fix flat tires for nothing for people with disabilities.

However, having to answer requests for directions many times a day could annoy the people being asked. Putting direction signs has thus emerged as a solution.

A photo circulated among local netizens a few years ago, for instance, showed a sign giving detailed guidance on how to go to Tu Du Obstetrics Hospital, located in District 1, leaning against a traffic sign pole near the infirmary, possibly because the people behind it had been asked a thousand times for the way to the place.

Another funny sign, featured in a photo by the former Saigon Tiep Thi newspaper in 2011, boasted the redrawing of the navigation for a complicated intersection one or two kilometers from Tan Son Nhat International Airport, situated in Tan Binh District, plus a postscript that said: “Please don’t ask + Thanks.”