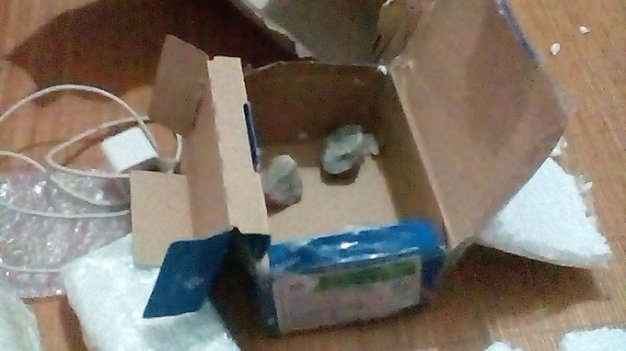 Mekong Delta resident Do Thi Be Em sent a used iPhone 4 to her relative in the north via express mail, but was shocked when the recipient said what had been delivered to her was an old Nokia 1200 handset together with stones.

On August 10, Em, living in Can Tho City, went to Ninh Kieu District Post Office to send her used white iPhone 4 to a relative in the northern city of Thai Nguyen via express service, she told Tuoi Tre (Youth) newspaper on Wednesday.

The package was delivered two days later with complete seals and stamps.

But the recipient was stunned to find an old, cheap Nokia 1200 handset after tearing the wrapping paper. There were also an iPhone charger, an Iphone case, and, much to her surprise, two stones inside the package.

“The post office in Thai Nguyen said they have no responsibility for the incident as the package remained sealed and the recipient did not complain when receiving it,” Em said.

The sender contacted the post office in Ninh Kieu, and was told to “wait for their verification,” she said.

Mai Thi Mai Linh, person-in-charge of mail express at the Ninh Kieu post office, confirmed to Tuoi Tre on Wednesday that she had received a complaint from Em.

Linh added the sender witnessed how the smartphone was wrapped, and the seal was unharmed when it arrived at the post office in Thai Nguyen.

“The incident was reported by the recipient, and the opening of the package was not witnessed by any postman,” she said.

“We are reviewing all relevant stages in delivering the package and will inform Em of the result.”

Nokia 1200 is a monochrome mobile phone released in 2007 by the erstwhile Finnish phone maker. The model is no longer available on the market.

iPhone 4 is the fourth generation of iOS smartphones developed by Apple Inc, which was first unveiled on June 7, 2010.