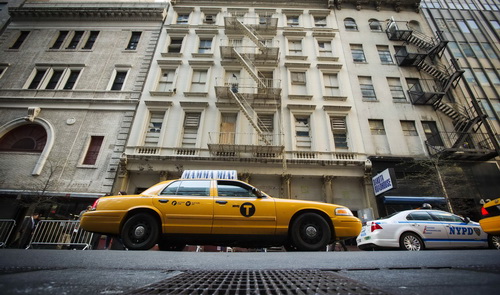 New York police said Friday that they have found a fragment of one of two airplanes that slammed into the World Trade Center on September 11, 2001.

The huge chunk of aircraft was found wedged between two office buildings in lower Manhattan.

The buildings, at 51 Park Place and 50 Murray Street, are located just two blocks from the site of the attacks known as Ground Zero.

Only a very narrow space exists between the buildings, which could explain how the part eluded investigators for nearly 12 years.

Police said the plane fragment appeared to be "part of a landing gear, apparently from one of the commercial airliners destroyed on September 11, 2001."

And the part bears a "clearly visible" Boeing identification number, according to police spokesman Paul Browne. Although police would not confirm the size of the piece, NBC television reported it was about five feet (1.5 meters) long.

Authorities said it will not be removed until the area has been thoroughly examined, including for possible human remains.

"The NYPD is securing the location as it would a crime scene, documenting it photographically and restricting access until the Office of the Chief Medical Examiner completes its health and safety evaluation protocol, after which a decision will be made concerning sifting the soil for possible human remains," Browne said in a statement.

The aircraft was one of two hijacked 12 years ago by Al-Qaeda suicide attackers and flown into the Twin Towers, destroying two of the nation's most iconic buildings.

Authorities were alerted to the chunk of wreckage on Wednesday after surveyors found what they believed was damaged machinery at the rear of 51 Park Place.

The attacks killed 2,753 people at Ground Zero. In coordinated attacks, another plane smashed into the Pentagon while a fourth crashed in Pennsylvania.

No remains of 1,122 of the victims in New York have ever been found, according to the Office of the Chief Medical Examiner.

Since 2006, authorities have selected 6,134 bone fragments and 1,845 other remains for advanced DNA testing, which has led to the identification of 34 victims.