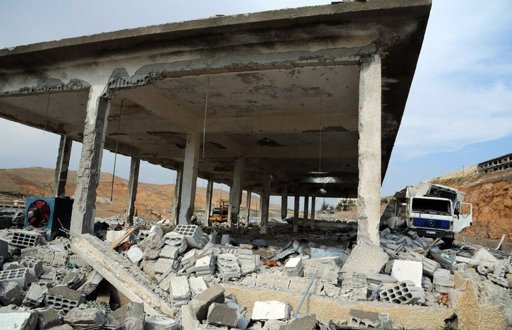 Israeli raids on Syrian targets at the weekend killed at least 42 soldiers, a watchdog said Monday, as UN chief Ban Ki-moon and the European Union warned against a spillover of the conflict.

"At least 42 soldiers were killed in the strikes, and another 100 who would usually be at the targeted sites remain unaccounted for," Syrian Observatory for Human Rights director Rami Abdel Rahman told AFP.

The group earlier gave a death toll of 15 in the strikes, which came early on Sunday and were the Jewish state's second reported attacks on Syria in 48 hours.

Iran and the Shiite group Hezbollah are steadfast allies of Syrian President Bashar al-Assad's regime, and arch-foes of of Israel.

UN leader Ban warned against any escalation of a conflict that has killed more than 70,000 people in Syria since it erupted in March 2011.

"The secretary-general calls on all sides to exercise maximum calm and restraint, and to act with a sense of responsibility to prevent an escalation of what is already a devastating and highly dangerous conflict," his spokesman Martin Nesirky said.

"The secretary-general urges respect for national sovereignty and territorial integrity of all countries in the region, and adherence to all relevant Security Council resolutions."

Egypt condemned the raids as a "violation" of international law, Britain warned of "increasing danger" to the Middle East, and France called for a political solution to the conflict.

The EU also said it feared recent developments "risk dragging the region into an expanding conflict."

Russia, the Assad regime's most powerful ally, said it was "especially" concerned by the Israeli strikes, warning they threatened neighbouring Lebanon.

And China implicitly criticised the strikes as Israeli Prime Minister Benjamin Netanyahu arrived in Shanghai, saying "we are opposed to the use of force and believe that the sovereignty of any country should be respected".

The Syrian regime's main regional ally Iran said the strikes would shorten Israel's existence, and denied the weapons targeted were from the Islamic republic.

A Syrian official in Damascus, reached by phone from Beirut, warned "Syria will respond to the Israeli aggression and will choose the moment to do so."

"It might not be immediate because Israel now is on high alert," he added. "We will wait but we will answer."

A diplomatic source in Beirut told AFP the sites were the Jamraya military facility, a nearby weapons depot and an anti-aircraft unit in Sabura, west of the capital.

Sunday's strike came about 48 hours after a reported Israeli raid on a weapons storage facility at Damascus airport.

Israel reportedly targeted the Jamraya facility earlier this year, in a January 30 raid its officials have implicitly acknowledged.

Residents of the Damascus district of Dumar said Sunday's strike felt "like an earthquake" and light up the night sky.

UN human rights investigator Del Ponte said there was evidence that Syrian rebels have used the deadly nerve agent sarin in their fight against Assad's forces.

"According to the testimonies we have gathered, the rebels have used chemical weapons, making use of sarin gas," the former UN war crimes prosecutor said in a Swiss radio interview.

"We still have to deepen our investigation, verify and confirm (the findings) through new witness testimony, but according to what we have established so far, it is at the moment opponents of the regime who are using sarin gas," she said.

US President Barack Obama has said the use of chemical weapons in the conflict was a "red line" for his administration but also that he does not foresee US troops on the ground in Syria.

The International Committee of the Red Cross meanwhile said the ongoing fighting was preventing the evacuation of the dead and wounded.

"An increasing number of casualties are being left behind owing to the life-threatening risks associated with the retrieval of the wounded and the dead," the organisation said.