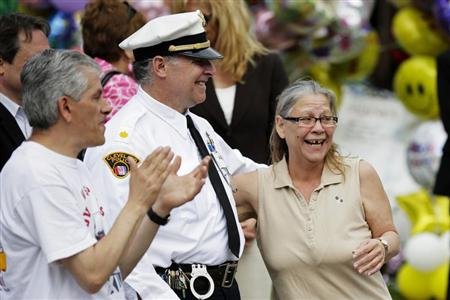 'Best Mother's Day" ever for mother of freed Cleveland captive

The mother of Gina DeJesus is celebrating the "best Mother's Day" ever on Sunday after her daughter was freed with three other captives last week from a long imprisonment in a Cleveland home.

DeJesus, 23, Amanda Berry, 27, and Berry's 6-year-old daughter were welcomed into their family homes last week after an escape and rescue on Monday from the dungeon-like house.

"This is the best Mother's Day I could ever have," said Nancy Ruiz when asked by a reporter last week how this year's celebration of motherhood would differ from those during the nine years her daughter was missing after she vanished while walking home from junior high school.

Mother's Day has a changed meaning for Berry, who during 10 years in captivity lost her mother and conceived and bore her own child, who DNA indicates was fathered by accused kidnapper Ariel Castro, police and prosecutors said.

There was no homecoming for the fourth captive, Michelle Knight, 32, the longest-held, who slipped into seclusion after being released from a hospital on Friday. She shunned hospital visits from family members, some of whom believed she was a runaway when she disappeared 11 years ago after losing custody of her young son, her grandmother said.

The Cuyahoga County prosecutor is seeking murder charges, which could carry the death penalty, against Castro, 52, a former school bus driver who police said induced several miscarriages by beating and starving Knight.

Castro is being held on $8 million bail on charges he kidnapped and raped the three women while keeping them locked up in a rundown Cleveland home stocked with ropes and chains.

Knight was kidnapped in 2002 at the age of 20; Berry in 2003 the day before her 17th birthday; and DeJesus in 2004, when she was 14. Castro forced Knight to deliver Berry's daughter, and he threatened to kill Knight if the baby died, according to a police report.

Berry told police her escape had been her first chance to break free in the 10 years she was held, seizing an opportunity during Castro's momentary absence. With the help of neighbors, she and her daughter broke free, and police freed the other two women.

The community has rallied around the women, with offers of help pouring in from around the world and people offering cash, furniture and even use of a vacation home to help them rebuild their lives.

Three members of the Cleveland City Council have set up a fund to provide financial assistance to the women.

"It's a big healing process that is beginning," Councilwoman Dona Brady said on Saturday.

Since it was established last week, the fund has raised more than $50,000, said Cleveland Councilman Brian Cummins, who helped arrange the Cleveland Courage Fund, which is administered by a non-profit organization.

Cummins said the fund for the three women had received donations from people across the United States, as well as Canada, France and Australia.

The money will be distributed to organizations to help the women pay for therapy, doctor's visits, housing and other expenses, Cummins said.