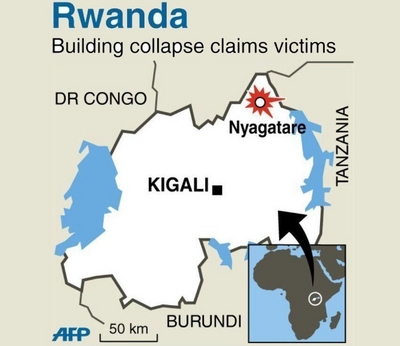 Six people died and more than 30 others were injured after a building collapsed in northeastern Rwanda, police said Wednesday as they called off rescue efforts a day after the accident.

"Six people working on the site died as the result of the building collapse," Rwanda's police said in a statement. "The search and rescue mission...has been completed and the site is clear."

Those killed and the others who were rescued from the rubble were construction workers on the part-finished four-storey building, which collapsed on Tuesday afternoon.

"The rescue operation is over, we are now removing the debris," local police chief Eric Mutsinzi told AFP, speaking from the wreckage of the building in Nyagatare, a town some 100 kilometres (60 miles) northeast of the capital Kigali.

Both police and the army worked to free those trapped in the rubble, with at least 30 people pulled from the debris alive.

Workers from the building described how pillars on the ground floor began to buckle after they had started to enlarge offices there.

"We were knocking down walls on the ground floor to enlarge a room that a bank was going to move into," recounted 31-year-old Emmanuel Nkulikiyimana who was working on the building as a labourer and who is now hospitalised in Nyagatare.

He and six other workers, along with one passer-by who was injured at the same time, are sitting on mattresses on the hospital floor receiving medical care.

"My colleague said 'look the pillar is buckling'. I looked and another one buckled. I called my boss who said it wasn't a big problem and that we were going to fix it. Another pillar buckled and the boss told those who were knocking down the wall to get out so we ran. It was as I was running out of the building that I was injured."

"I did what the boss told me to do," he told AFP, adding that the "boss" was also the proprietor of the building.

Lying next to him with a leg injury Bonaventure Nduwayesu, 26, explained how he lay trapped under the rubble for at least one hour.

"I had difficulty breathing because there was so little space. I couldn't hear anything. I was scared. I thought they would never find me," he said.

Initial reports had said that as many as 100 people had been feared trapped in the rubble, but as rescue efforts began officials scaled back the numbers of those involved.

Three of the injured have been airlifted to hospital in Kigali, while 15 others remain in hospital in Nyagatare, police said.

"We do not know exactly how many came to work...Nobody knows if there are more people" under the rubble, said Patrick Byiringiro, a doctor at the town's hospital. "We're trying to see if there are not people who have been ignored."

The owner of the building, who was overseeing the construction work, was also injured in the collapse.