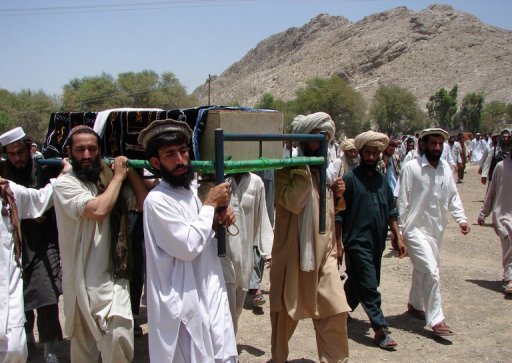 US drone strike kills 17 in Pakistan

Security officials told AFP that Afghan and Pakistani militants were among the dead at the compound in the town of Miranshah, but that there was no immediate confirmation of any high-value target.

Unmanned aircraft fired four missiles into the compound in the main market area of the main town of North Waziristan, which is Pakistan's most notorious hub of Islamist militants.

US drone strikes are rarely reported in built-up areas of the semi-autonomous tribal belt and officials said the aircraft flew over the market area for hours before striking.

"Death toll in drone strike has risen to 17," a security official based in North Waziristan told AFP. Officials had overnight said four militants were killed.

Intelligence officials confirmed the toll and said the compound had belonged to militants from the Haqqani network, which the United States has blamed for some of the deadliest and most high-profile attacks on Western and government targets in Afghanistan.

It was the deadliest US drone strike reported in Pakistan since 18 insurgents were killed on the border between North Waziristan and the tribal district of Orakzai on October 11, 2012.

It was also the second US drone attack reported inside Pakistan since Nawaz Sharif was sworn in as prime minister in June.

The Pakistani government on Wednesday condemned the drone strike as a violation of sovereignty, as it does routinely after each attack is reported.

"The government of Pakistan has consistently maintained that drone strikes are counter-productive, entail loss of innocent civilian lives and have human rights and humanitarian implications," the foreign ministry said in a statement.

Washington views drone strikes as a vital tool in the fight against Taliban and Al-Qaeda militants holed up in the lawless tribal areas along the border with Afghanistan.