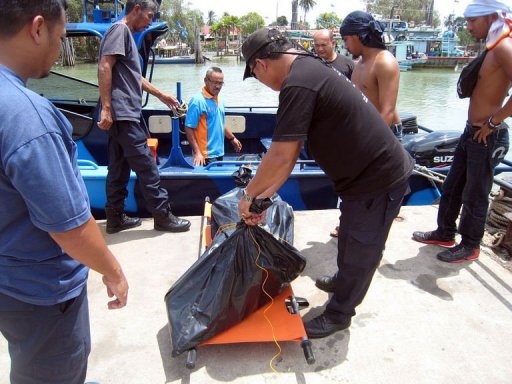 Malaysian rescuers on Sunday found three bodies at sea as hopes faded for 37 other Indonesians who went missing days earlier when their boat sank.

The wooden boat was believed to be carrying 44 people including women and children from Malaysia's southern state of Johor to Indonesia's Batam island. It sank in heavy seas late Thursday and four men were rescued on Friday.

"It is believed these three bodies -- two women and one man -- are victims of the boat accident," it said. "Thirty-seven are still missing."

The accident occurred 13 nautical miles (24 kilometres) off the coast.

The passengers are believed to have been illegal migrants working in Malaysia who wanted to return to their country to celebrate Eid al-Fitr, the end of the Muslim fasting month next week, without passing border controls.

Amran Daud, an official with the maritime agency, said earlier Sunday that six vessels had been dispatched, while several helicopters were on standby with the weather clear.

"After three days in the ocean the chances are very slim to get a survivor," he told AFP, adding based on the survivors' accounts the boat was "not seaworthy".

Survivor Edey Muliadi was quoted by The Star daily as saying that when high waves hit the boat, the passengers panicked and crowded to one side of it, causing it to overturn.

"When we were thrown into the sea, all I could hear was people and children screaming in the pitch darkness," said the 26-year-old, who worked as an excavator operator near the capital Kuala Lumpur.

He said the passengers tried to hold on to the overturned boat in the storm, but the vessel sank.

Muliadi said he managed to hold on to a plastic container filled with hot petrol, some of which spilled and scalded his chest, abdomen and hands.

"I was also bitten by small fish. It was really painful but all I could think of was to stay alive for my family," he was quoted by The Star as saying.

Another survivor, a farm helper who was hoping to reach his home island of Lombok via Batam, said he paid some 1,300 ringgit ($400) for what was to be his first trip home in 13 years.

Amran said the four men would be handed over to Indonesian consulate officials to be returned to their country.

An estimated four million foreigners, mostly from poorer countries in the region such as Indonesia and Myanmar, work in Malaysia -- many illegally. They fill low-paying jobs shunned by locals on plantations, construction sites and in factories.

In mid-July an Indonesian woman died and seven people went missing after their wooden boat capsized off Johor.