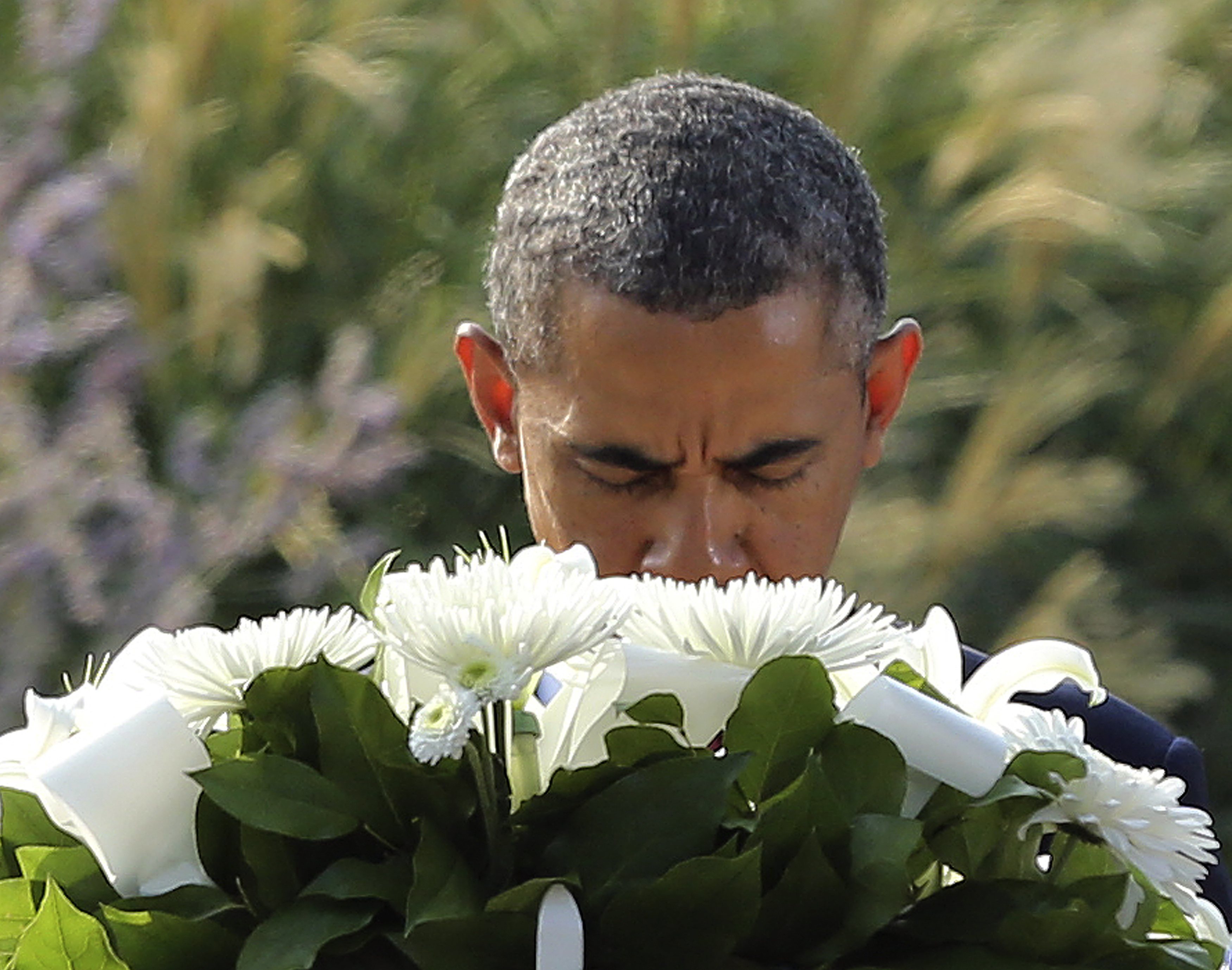 In New York, the US capital Washington and a field in Shanksville, Pennsylvania, relatives of the nearly 3,000 people killed in the hijacked airliners and on the ground gathered for somber remembrance ceremonies.

"Our hearts still ache for the futures snatched away, the lives that might have been," Obama said at the Pentagon, where 184 died when one of the planes struck the building.

"They left this Earth. They slipped from our grasp."

US troops invaded Afghanistan shortly after the 9/11 attacks to oust the Taliban for giving refuge to Al-Qaeda, and Obama gave thanks to the American forces who served there -- but noted the war was now coming to a close.

He said the United States would remain vigilant in the face of future terror threats but said military might alone could not bring peace and security.

"Let us have the wisdom to know that while force is at times necessary, force alone cannot build the world we seek," he said.

On Tuesday, Obama delivered an address to the nation in which he explained why he was for now holding off on punitive military strikes against Syria over its alleged chemical weapons use.

"I will not put American boots on the ground in Syria. I will not pursue an open-ended action like Iraq or Afghanistan," he said.

Polls show a majority of Americans -- weary of war after US interventions in Iraq and Afghanistan -- oppose action in Syria.

Obama has asked for Congressional approval of his plan for limited strikes, but he has yet to garner the support needed on Capitol Hill.

Votes have been put off as US Secretary of State John Kerry heads to Geneva for talks with Russia's foreign minister about a Moscow-led plan to neutralize the chemical arsenal of Syrian President Bashar al-Assad.

In New York, 9/11-era mayor Rudolph Giuliani wiped away a tear at the Ground Zero event, which began with a moment of silence at 8:46 am (1246 GMT), marking the time when the first plane smashed into the World Trade Center.

Moments of silence were observed at 9:03 am, the time when the second tower was hit; 9:37 am, the time of the Pentagon attack; and 10:03 am, when a fourth airliner crashed in Pennsylvania after passengers intervened.

Relatives gathered at the 9/11 Memorial around the two huge black fountains that mark the footprints of the Twin Towers -- which collapsed in the attacks -- for the ritual reading of the names of the dead.

That list has 2,983 names in all: the 9/11 victims, plus those killed in the precursor to those attacks, the 1993 car bombing of the World Trade Center.

Some relatives brought photos of the dead, while others left roses near the spot where their loved ones' names are etched into the memorial.

At the Pentagon, Obama remembered American soldiers, diplomats and intelligence agents who had died since 2001, and said the long ground war in Afghanistan is entering its final chapter, as most US troops withdraw next year.

The president also paid tribute to the four Americans killed in a 9/11 attack last year on the US mission in Benghazi, Libya -- which sparked a political furor over White House explanations about who was to blame.

An explosion, meanwhile, caused serious damage to a Libyan foreign ministry building in Benghazi on Wednesday.

Following the Pentagon ceremony, Obama volunteered at a food bank that offers meals to people with serious illnesses, saying remembrances of the attacks should also include "the incredible outpouring of neighbors helping neighbors."

And at the US Capitol, hundreds of lawmakers marked the anniversary singing "God Bless America," -- which members of the House and Senate had sung 12 years ago shortly after the attacks.