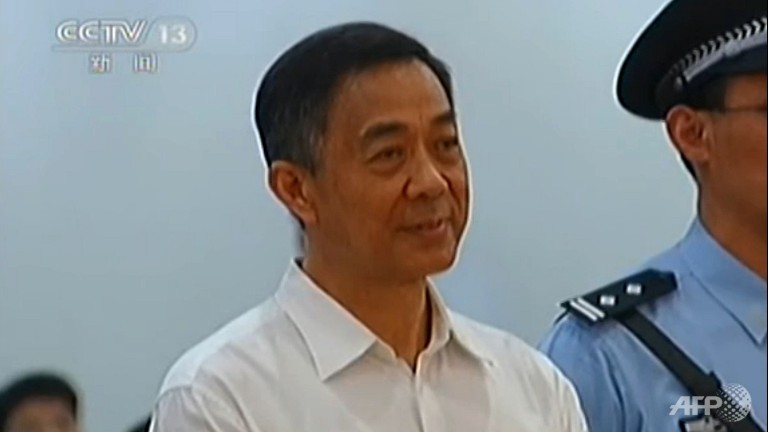 Fallen Chinese political star Bo Xilai was sentenced by a court to life in prison Sunday, following a sensational scandal that culminated in the country's highest-profile trial in decades.

The sentence was announced by the Jinan Intermediate People's Court on its verified page on Sina Weibo, a Chinese equivalent of Twitter. Bo, one of China's top 25 politicians before his dramatic downfall, was convicted of bribery, embezzlement and abuse of power.

The catalyst for Bo's fall came when his top aide in mega-city Chongqing, where he was party chief, fled to a US consulate with evidence the politician's wife had murdered a British associate in February 2012.

With factions in the upper echelons of the Communist Party reportedly split over how to handle him, a year and a half passed before he went to trial, becoming the most high-profile official to do so in decades.

In last month's gripping five-day hearing he mounted a fierce defence against claims that he corruptly obtained 26.8 million yuan ($4.4 million) and abused his political position to cover up the killing committed by his wife.

The bribery charges make the 64-year-old eligible for the death penalty, but several analysts had told AFP they expected him to receive a prison sentence of about 18 years, decided as a result of backroom political bargaining.

The proceedings took place amid stepped up security outside the court, with dozens of police surrounding the building in Jinan, capital of eastern China's Shandong province.

Dozens of police, some uniformed and others in plain clothes surrounded the court on Sunday. Barricades and barriers were erected more than 50 metres away from the court to prevent people from approaching.

A select group of media was allowed into a penned off area in front of the courthouse, where they clamoured to take photos of vehicles entering the court.

Though edited transcripts from the trial were posted online, China's government has tightly controlled information about Bo's case, and police erected barriers to stop pedestrians from entering areas around the court.

Passers-by hurried towards a shopping centre, showing little interest in the proceedings.

"Ordinary people don't know much about these political matters," a 22-year-old motorcycle driver surnamed Guo said Saturday, as he sheltered from rain outside a noodle restaurant. "Top officials are very distant from our everyday lives."

Bo poured billions into public works and social housing programmes while party chief of the southwestern megacity of Chongqing, where he launched a high-profile anti-crime campaign that won him admirers across China.

Despite his popularity, reports of forced confessions and torture during the crime crackdown horrified Chinese liberals, while some top party leaders saw his ambition as challenging the party's cherished unity.

The verdict comes as China's new leadership under President Xi Jinping attempts to show it is cracking down on corruption, which he has said threatens the existence of the Communist Party.

But locals in Jinan expressed a widely held belief that trials of top officials are the outcome of political infighting, rather than purely legal proceedings.

"Bo is the kind of leader ordinary Chinese respect, he did a good job in Chongqing" said Lu Mingcai, a 63-year-old retired chauffeur.

"His mistake is a political one. It's got nothing to do with whether he was corrupt or not," Lu said, adding: "Bo will go to prison for sure."

Liu Qing, a middle-aged market stall owner said: "(Bo) has been sacrificed in a political struggle. I don't know if he was corrupt. What government official isn't corrupt these days?"