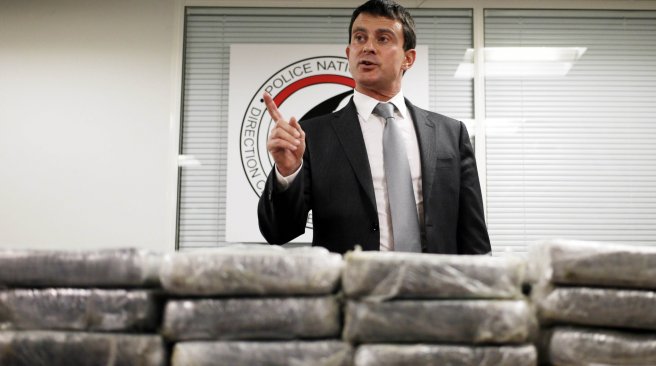 The drugs, seized on September 11, had been packed into 30 suitcases, Valls told a news conference on Saturday in Nanterre, outside Paris, adding that this was the biggest-ever haul in metropolitan France.

A source close to the investigation said the flight had originated in the Venezuelan capital Caracas, adding that the cocaine had a street value of some 200 million euros ($270 million).

The operation was carried out in collaboration with Spanish, British and Dutch police, and Valls said "several members of a criminal organisation" had been arrested.

Valls said the seizure illustrated the "importance of strengthening international cooperation in the fight against traffickers", as he displayed the 30 empty suitcases that had contained the cocaine and were not linked to any of the passengers on the flight.

Valls said four tonnes of cocaine had been seized in France since the start of the year.

"Such a seizure, in such circumstances, is quite simply exceptional," French police commander Mohamed Douhane told AFP.

"Now an enquiry ... will have to determine if there were other accomplices, whether within the company or at the arrival or departure airports," he added.

Authorities in Caracas said they had also launched an investigation to determine the origins of the haul.

The office of Venezuela's attorney general said in a brief statement that prosecutors and National Guard anti-drug police are investigating how the cocaine-laden suitcases got aboard the flight at the Simon Bolivar International Airport, and who was behind the smuggling operation.

Cocaine comes from coca leaves grown in countries like Colombia, Peru and Bolivia. Venezuela does not produce cocaine, according to United Nations monitors, but drug traffickers are increasingly using its territory to smuggle drugs into other nations.

In 2012, Venezuelan police seized some 45 tons of illegal drugs, according to government figures.