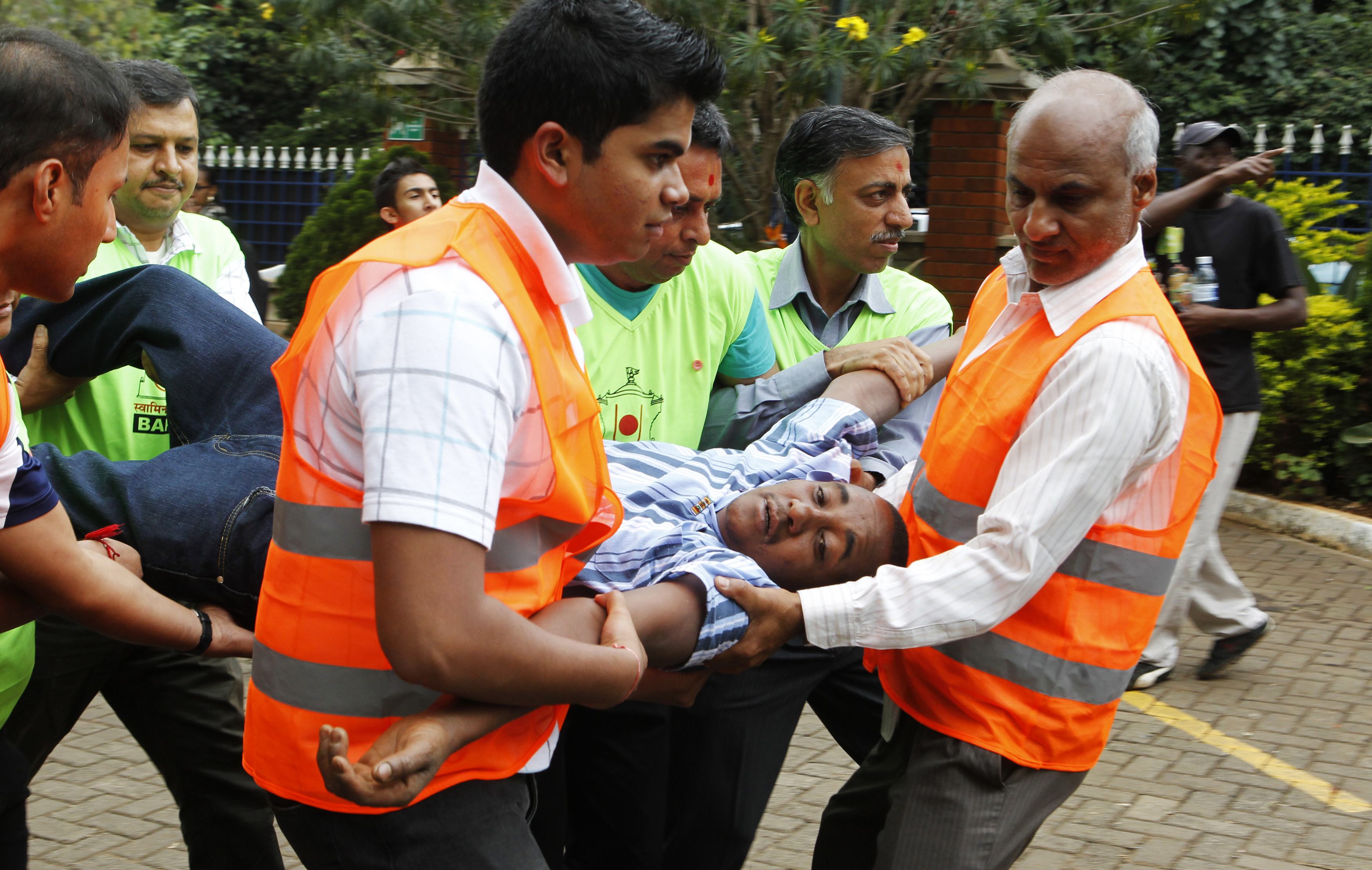 NAIROBI – Gunfire erupted on Sunday at an upmarket shopping mall in Kenya's capital Nairobi, where at least 59 people were killed and several more held hostage by gunmen from a Somali Islamist group that has declared allegiance to al Qaeda.

The shooting, lasting about 30 seconds, came after a period of tense quiet in the standoff, a Reuters witness said, speaking from close to the shopping centre that has several Israeli-owned outlets and which is frequented by Westerners and Kenyans.

Foreigners, including a Canadian diplomat, were killed in Saturday's attack at Westgate mall, claimed by the Islamist group al Shabaab.

Shortly after the shots were fired, troops in camouflage ran crouching below a restaurant terrace along the front of the building that had been buzzing with customers when assailants charged in. One witness said they first told Muslims to leave.

For hours after the brazen attack, the dead were strewn around tables of unfinished meals. At one food outlet, a man and woman lay in a final embrace after they had been killed, before their bodies were later removed.

In the darkness of Sunday morning, music still played.

Kenyan President Uhuru Kenyatta, facing his first major security challenge since his election in March, said his close family members were among the dead.

The assault was the biggest single attack in Kenya since al Qaeda's East Africa cell bombed the U.S. Embassy in Nairobi in 1998, killing more than 200 people. In 2002, the same militant cell attacked an Israeli-owned hotel on the coast and tried to shoot down an Israeli jet in a coordinated attack.

Interior Minister Joseph Ole Lenku told reporters the death toll had risen to 59, and that security forces were doing everything they could to rescue hostages still inside the mall.

He added that 175 people had been taken to hospital after an assault that could prove a costly setback for east Africa's biggest economy, which relies heavily on tourism revenues.

The dead included children, and the wounded ranged in age from 2 to 78. Many victims were at a cooking competition when assailants opened fire on them, witnesses said.

The focus of attention on Sunday was on Nakumatt supermarket, one of Kenya's biggest chains.

Soldiers joined the security operation backed by armoured personnel carriers in the hours after the attack that was launched around 12.30 p.m. (0930 GMT) on Saturday. Security forces have been combing through the mall, clearing the floors.

As helicopters hovered over the capital, a paramilitary officer at the scene, a rifle slung over his shoulder, said: "They will be arranging how to attack (the assailants)."

One woman emerged on Sunday morning after she had been hiding under a car in the basement. She was holding one shoe and looked dazed, and was making a frantic phone call to her husband who later met her.

U.S. Secretary of State John Kerry, who offered assistance to Kenya in the incident, said several U.S. citizens had been hurt and the wife of a U.S. diplomat working for the U.S. Agency for International Development was killed.

Al Shabaab, which is battling Kenyan and other African peacekeepers in Somalia, had repeatedly threatened attacks in Kenya if Nairobi did not pull its troops out of their country.

The group appeared to taunt the security forces, saying on its official Twitter handle @HSM_Press that there would be no negotiations whatsoever with Kenyan officials over the standoff.

"10 hours have passed and the Mujahideen are still strong inside #Westgate Mall and still holding their ground. All praise is due to Allah!", the group said late on Saturday, although its account on Twitter was suspended on Sunday morning.

Kenyatta, who faces charges of crimes against humanity at a trial starting in November at the International Criminal Court, vowed to defeat the militants who have said it is time to shift the war to Kenyan soil.

"We have overcome terrorist attacks before," he said.

Relatives of hostages still trapped in the mall kept vigil overnight at a nearby religious community centre.

"I want her to come out alive," said Kevin Jamal, as he joined Kenya Red Cross Society volunteers and waited for news about his sister who he said was being held inside.

He said security forces could have done better. "They should not allow themselves to be outmanoeuvred by less than 20 people," he said.

A private security firm would normally search patrons of the mall using metal detectors and open the trunks of cars entering parking areas, but the guards would be unarmed.

Nakumatt closed its other stores on Sunday, local media reported, while the mall was cordoned off and surrounded by police and paramilitary forces.

Ole Lenku said the government believed that there were 10-15 attackers who security forces had been able to "isolate", but no communication had yet been established with them.

Those rescued said at least one of the assailants was a woman. One militant was shot and arrested in clashes following the initial siege, but died shortly afterwards at a hospital.

Witnesses said the attackers were armed with AK-47 rifles and wore ammunition belts. Police said they stormed in during a children's cooking competition hosted by a radio station at the mall, just as the winners were about to receive prizes.

Kenya sent its troops into Somalia in October 2011 to pursue militants it blamed for kidnapping tourists and attacking its security forces.