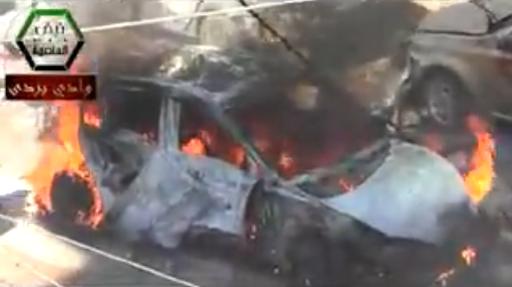 Beirut — The toll from a car bomb explosion at a mosque in Suq Wadi Barada near Damascus Friday soared to at least 40, including seven children, said the Syrian Observatory for Human Rights.

The Syrian government and opposition exchanged blame for the carnage in the town.

Suq Wadi Barada is under rebel control and ringed by troops loyal to the regime of President Bashar al-Assad.

"The toll from a car bomb explosion that detonated after Friday prayers in Suq Wadi Barada has risen to 40, including seven children and a woman," said the Observatory.

"The number of dead is likely to rise because there are dozens of wounded, most of them in critical condition," it added.

State news agency SANA had earlier reported the blast, blaming "terrorists", the term the Assad regime uses for forces fighting to oust it.

The opposition National Coalition meanwhile blamed the Assad regime for the "massacre" caused by what it said were two car bombs placed outside the Osama Bin Zeid mosque in Suq Wadi Barada.

"Bashar al-Assad's gangs detonated two car bombs at midday... that were planted in front of the Osama Bin Zeid mosque in Suq Wadi Barada," the Coalition said in a statement.

"The regime's constant commission of massacres makes it the duty of countries of the free world, the friends of the Syrian people, as well as international human rights and humanitarian organisations to fulfil their responsibilities towards civilians," it added.

They must "protect the lives of Syrians and uphold their rights".

An activist on the ground told AFP via the Internet that there had only been one explosion.

"A second car bomb had been planted but it was discovered and defused before it exploded," he said.

Amateur video shot after the explosion showed clouds of smoke rising above a burning car, while cries of men and women could be heard amid the chaos that followed the blast.

Car bombings have plagued Syria in recent months, killing scores across the country.