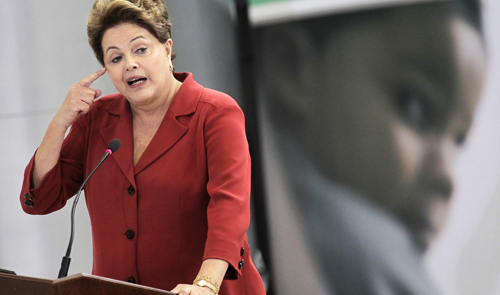 Germany and Brazil are drafting a UN General Assembly resolution that would demand an end to excessive spying and invasion of privacy after a former US intelligence contractor revealed massive international surveillance programs, UN diplomats said on Friday.

Brazilian President Dilma Rousseff and German Chancellor Angela Merkel have both condemned the widespread snooping by the US National Security Agency.

Charges that the NSA accessed tens of thousands of French phone records and monitored Merkel's mobile phone have caused outrage in Europe. Germany said on Friday it would send its top intelligence chiefs to Washington next week to seek answers from the White House.

In response to the disclosures about US spying, many of which came from fugitive former NSA contractor Edward Snowden, the German and Brazilian UN delegations have begun work on a draft resolution to submit to the 193-nation General Assembly, several UN diplomats told Reuters.

"This resolution will probably have enormous support in the GA (General Assembly), since no one likes the NSA spying on them," a Western UN diplomat said on condition of anonymity.

Merkel demanded on Thursday that Washington strike a "no-spying" agreement with Berlin and Paris by the end of the year, adding she wanted action from President Barack Obama, not just apologetic words.

Last month, Rousseff used her position as the opening speaker at the General Assembly's annual gathering of world leaders to accuse the United States of violating human rights and international law through espionage that included spying on her email.

Rousseff also expressed her displeasure by calling off a high-profile state visit to the United States scheduled for this month over reports that the NSA had been spying on Brazil.