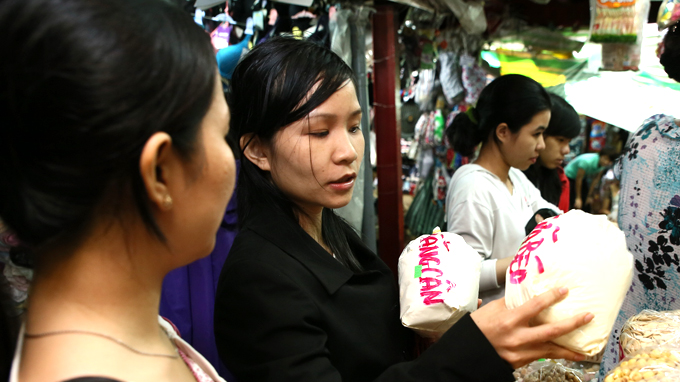 While a number of parents have easily been able to buy the dubious milk powder sold by kilogram to feed their children, the market watchdog agency does not seem to know such a type of product exist.

Under current law, a milk product has to meet myriad of standards and pass a similar number of procedures in order to be eligible for distribution in the market.

These standards include having label with adequate information of the product’s nutrition content, manufacturer, expiry date, among other things.

But the “four-no” milk powder does not meet any of these requirements. It lacks a label, nutrition content, manufacturer information, and certificate of quality.

Still, it has been widely sold at markets across Ho Chi Minh City, and the city’s market watchdog agency said they have never discovered any case in which such product is sold.

After Tuoi Tre ran a series of reports about the dubious origin and quality of the milk, traders have pulled the product off shelves, but are still willing to sell under customer’s request.

The move again keeps them from being detected by market management officers, who only began to check following the reports by Tuoi Tre.

The management boards of Ba Chieu market said it has worked with traders over the milk powder issue, and eventually seized only 5kg of the product from them.

The powder is stored in a plastic bag without a single piece of information.

“Even when the products have been marketed, food safety and hygiene agencies can still take samples of them for tests and order a recall if necessary,” director of a powdered milk distributor said.

“But did the market watchdog fail to check, so that the milk powder could be sold rampantly on the market?”

The director said it is little likelihood that the milk powder has been smuggled as the official import tax is only 3 percent, while import price also stands at a low rate.

“It’s likely that the powder has been imported and mixed with aromatizer and other chemicals before being sold to consumers,” he added.

But only the sellers know how the product is mixed, which poses risks for children who drink the milk, he warned.

Even though small traders have switched to secretly selling the milk powder, the wholesale business of this commodity remains unfazed.

Trang, the saleswoman of a company specializing in importing and distributing food materials and chemicals, said the milk powder is a bestselling at her company.

“We are importing a container of the product next month,” she said.

Trang said the company will sell the milk powder to any customers, and does not care what they do with the material, while asserting that all of the imports have adequate papers and certificates.

Trang said her customers usually mix the milk powder, which contains 26 percent of fat, with aromatizer and sugar to increase flavor. Even without the mixture, the powder can be consumed right away with warm water, she added.

Trang said her company imports the product from New Zealand at only VND130,000 per kg.

However, it has been discovered that the company also registered to import milk powder of Chinese origin.