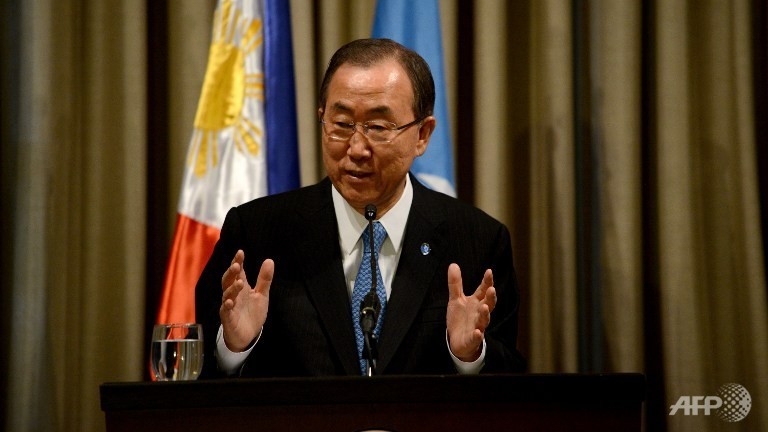 MANILA – United Nations Secretary-General Ban Ki-moon called on donor nations Sunday to ramp up aid to typhoon-battered Philippines as it grapples with a funding shortfall on the long road to recovery.

"We must not allow this to be another forgotten crisis," Ban told reporters a day after touring the storm-ravaged city of Tacloban.

He said the UN had only achieved 30 percent of the $791 million in aid it had appealed for to boost relief and rehabilitation efforts in areas devastated by Super Typhoon Haiyan last month.

"I am appealing (to) the donor community, to speed up, scale up their support," Ban said, adding that he had met with the ambassadors of key donor countries in Manila on Sunday.

He said he was deeply moved and inspired by his visit to Tacloban on Saturday, where despite the many challenges "people are working hard to recover".

Ban acknowledged some bottlenecks in relief efforts in the immediate aftermath of the typhoon owing to logistical challenges in reaching remote central Philippine islands impacted by the typhoon.

However, he said the UN stood firm in its commitment to help the Philippines as it lays out an ambitious plan to rebuild storm battered areas.

The typhoon, one of the strongest ever to hit land, left 6,102 people dead and 1,779 others missing, according to a government tally.

Ravaging an area the size of Portugal, it inflicted $12.9 billion in damage and left 4.4 million people homeless. The Philippine government said it would need $8.17 billion over four years in a massive rebuilding effort.