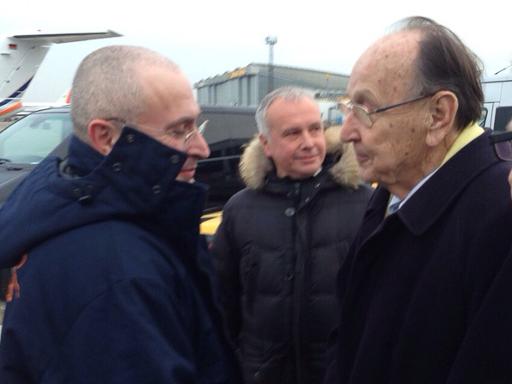 BERLIN, December 22, 2013 (AFP) - Russia's most famous inmate and Kremlin foe Mikhail Khodorkovsky was due to address his future Sunday after being whisked to Germany upon his stunning release following a decade in jail.

Formerly Russia's richest man, Khodorkovsky was reunited with his family in Berlin on Saturday after being pardoned a day earlier by President Vladimir Putin in what was widely read as a Kremlin effort to mute criticism of its dire rights record ahead of February's Winter Olympic Games in Sochi.

Khodorkovsky -- an oil baron whose Yukos empire was subsumed by the state while he was in jail on criminal charges his supporters view as politically motivated -- was due to give his first news conference at 1200 GMT at the Cold War symbol Checkpoint Charlie, a well-known crossing point from East to West Berlin.

He told Moscow's The New Times in an interview segment posted on the opposition magazine's website Saturday that he had been able to see his wife Inna only a handful of times in the past 10 years.

"Once in every three months -- for four years out of the 10 -- I was allowed to spend the night in the meeting room," said Khodorkovsky as he leaned back in an armchair of Berlin's luxurious Adlon Hotel still sporting an inmate's buzz cut and looking a few pounds underweight.

The New Times website became inaccessible moments after a video clip of the interview was posted due to what appeared to be a well-orchestrated hacker attack -- one of many against opposition news sources in Russia.

Khodorkovsky, 50, was a Western investment community darling who waged open battles against Putin's political agenda and the Russian state's economic approach until his arrest on tax evasion charges in October 2003.

Khodorkovsky openly funded Kremlin opposition parties and was famous for raising uncomfortable corruption allegations as well as pitting his Yukos oil company's interests against those of state-controlled firms.

Return to Russia 'not on agenda'

The future of a man once believed to be worth $15 billion appeared uncertain after Germany's former foreign minister Hans-Dietrich Genscher -- a veteran diplomat with Soviet-era ties to Moscow -- helped negotiate his lightning transfer to Berlin.

A German politician who is a longstanding friend of the former oil baron said after meeting Khodorkovsky for more than an hour that his "return to Russia is not on the agenda".

But Greens MP Marieluise Beck quickly added that she had no mandate to talk about Khodorkovsky's plans.

Moscow's Kommersant broadsheet had earlier reported that the one-time tycoon had decided to seek a pardon after receiving a visit from representatives of Russia's security services.

Kommersant said the Russian agents warned Khodorkovsky about a possible third criminal case against him while reminding him of his mother's worsening health.

Khodorkovsky's 79-year-old mother Marina has cancer. Her voice was shaking as she told Russian television on Saturday that she was taking sedatives to help her cope with her emotions.

Putin's spokesman Dmitry Peskov declined to say whether any conditions were attached to Khodorkovsky's release or whether he would be free to participate in politics.

But Peskov added in telephone interview that Putin's old rival "is free to return to Russia. Absolutely."

A German analyst who helped with Khodorkovsky's transfer said the former oligarch would likely stay out of politics but could become a high-profile public figure and moral authority.

"He could take upon himself the role of (Alexander) Solzhenitsyn," said Alexander Rahr, in reference to the former Soviet dissident and Nobel prize-winning author.

US Secretary of State John Kerry welcomed the move while also urging Moscow to do more to improve the rule of law.

Two members of the Pussy Riot punk band who were jailed for staging an anti-Putin protest in a Moscow cathedral in 2012 are expected to be freed under a broader amnesty that comes less than two months before the Olympic Games open in Russia on February 7.

Thirty Greenpeace activists -- arrested on hooliganism charges after a raid on a Russian Arctic oil rig -- are also expected to escape prosecution.