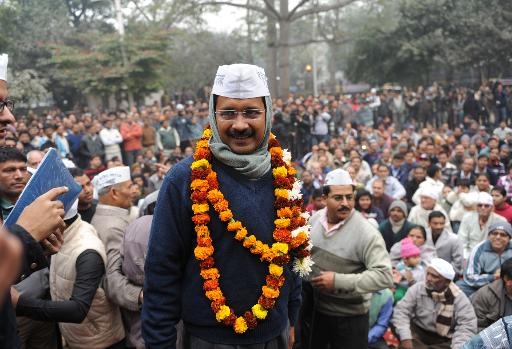 NEW DELHI – India's anti-graft crusader Arvind Kejriwal vowed Sunday to punish corrupt politicians and clean up "dirty politics" in a fiery speech that hinted his party may lend support to form a coalition government in Delhi.

Kejriwal, a former civil servant turned politician, has been under mounting pressure to form a coalition government since his party's stunning performance at December 4 state elections.

Kejriwal is wary of joining forces with the Congress party or the main opposition Bharatiya Janata Party (BJP) after voters flocked to his party, disillusioned with mainstream politics and angry over rampant corruption.

"If we form the government, we will pass the anti-corruption law and send corrupt BJP and Congress leaders to jail," Kejriwal told a rally in Delhi of several hundred supporters.

"We are not after political power. We want to change the system and cleanse the dirty politics," Kejriwal said, adding that he expected to make an announcement on forming government on Monday.

Kejriwal's Aam Aadmi Party (Common Man's Party) won 28 of the 70 seats at the polls for an assembly, trouncing the ruling Congress which took eight and depriving the biggest winner – the BJP with 31 – of a majority.

AAP's success, only a year after its formation, signalled its emergence as a new political force which poses a threat to India's two main parties at general elections next year.

AAP has until now refused to accept support from either the Congress or the BJP, fuelling criticism that they were running away from the responsibility of forming government.

AAP is seeking opinion on whether to form government in Delhi, holding public meetings and asking supporters to telephone or SMS their thoughts, in a move that taps into its grass roots base.

With Sunday the last day for the unusual consultations, speculation in the Indian press was mounting that Kejriwal would team up with Congress.

The Hindustan Times newspaper and other media reported Sunday that AAP has received an overwhelming response from the public in favour of forming a new government.

"We have got a very positive and clear response. If things go the same way (today), we will definitely form the government," the daily quoted an AAP leader, Manish Sisodia, as saying.

Congress, in power at the national level for a decade, has seen its popularity plummet following a slew of corruption scandals, and policy paralysis that has been partly blamed for India's faltering economy.

"We have some six months to go for general elections and we feel the Congress will dare not play any dirty tricks with us till then," Kejriwal said to loud applause from supporters.

"It is only the beginning, we will clean the whole country," he added.