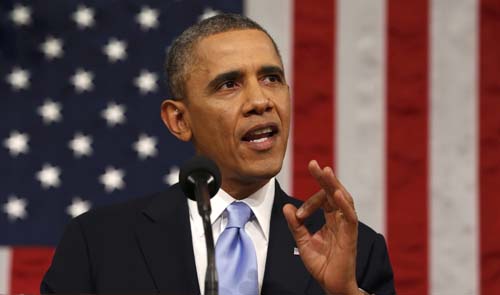 President Barack Obama will vow in his State of the Union address on Tuesday to act to help small-dollar savers, spur manufacturing and expand school internet access as part of his pledge to strengthen economic security for all Americans.

Helping low-income people rise to the middle class, expanding higher-paying jobs that many types of manufacturing offer, and improving the quality of US schools are part of the president's plans to improve the fortunes of low- and middle-income families.

Obama will create by executive order starter savings accounts for those able only to maintain small balances, the White House said in a summary of the president's annual speech before Congress. Such savers are now excluded from most retirement savings plans, and the action will benefit "millions," the White House said.

Obama also will promise to create four advanced manufacturing centers to build on four already announced, including one he visited recently in Raleigh, North Carolina, his aides said. The centers use money from private firms and government agencies to develop technologies for US-based manufacturers.

The president was also due to preview a program with Apple, Microsoft, Verizon, Sprint and other firms to expand and modernize internet connections in schools.

Obama was further set to renew his call to expand the Earned Income Tax Credit for workers without children. The EITC qualifies certain low-income people for a refundable tax credit.