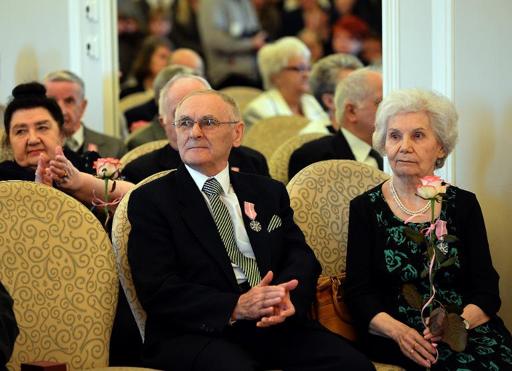 Married for 50 years? Poland says you deserve a medal

Grey-haired and grinning, two dozen couples hold champagne flutes at a Warsaw ceremony in their honour. They survived 50 years of marriage and in Poland, that is reason enough for a presidential medal.

"To qualify, you have to put in over 18,000 solid days of work. Other medals require less, so it really is a considerable feat to have spent the last half century together," Warsaw mayor Hanna Gronkiewicz-Waltz says at this month's event.

The lucky-in-loves take turns walking down the red carpet to accept their medals -- silver-plated with intertwined roses at the centre and a pink ribbon -- while family members cheer and play paparazzi at the back of the room at the so-called Wedding Palace.

The tradition is regularly played out in cities across the heavily Catholic country, with a hefty average of 65,000 medals awarded each year according to the president's office.

True, marital milestones are also recognised elsewhere. In the United States, a golden anniversary will get you a greeting from the White House, while Britain sets the bar a notch higher: couples have to make it through six decades without splitting for a message from the queen. She herself qualified seven years ago.

Yet no other country honours marathon marriages with a presidential medal, something more often associated with military feats for example.

"It's really quite unusual. I haven't found any other (medal) that's specifically for sustaining a marriage," says Megan Robertson, a 54-year-old computer programmer who runs the website "Medals of the World".

"Although, many countries have awards for raising large numbers of children -- something popular in Communist countries," adds the Briton who has herself been married for nearly 30 years.

Socialist-era Romania for example had "what they called the Order of Mother Hero, which I think she was, because you had to have 10 children to get it. That sounds pretty heroic to me."

Robertson says medals offer an indication of what a country finds important, whether it be a particular profession or trade or churning out enough children to fill factories and armies.

Women should not drive tractors

Poland's marital medal was introduced in 1960 under Communist rule and is very much a product of its time, according to social historian Marcin Zaremba.

"It's a reflection of public sentiment and the power elite's stance after Stalinism," says the University of Warsaw professor.

Stalinism had promised to topple the old world order and that vow also applied to family life, with women encouraged to enter the job market. But starting around 1955, press accounts showed a reversal of the trend.

"You could call it a conservative revolution. One specifying that in fact women shouldn't drive a tractor or work in mines, that a woman's place is at home with the kids and we should value her for it," Zaremba says.

He adds that Poland's communist party leader at the time, Wladyslaw Gomulka, was himself happily married and frowned upon divorce and sexual debauchery.

"And so this medal is also a reflection of his mindset."

The marital scene has changed quite a bit since then, according to demographer Piotr Szukalski from the University of Lodz in central Poland.

"Today fewer and fewer young people are deciding to marry, choosing instead to be in informal unions. Those who do marry, do so at an ever later age, and if unsatisfied, more and more of them opt for divorce," he told AFP.

According to Poland's Central Statistical Office, 13 percent of marriages ended in divorce in 1980, while in 2012 that number was nearly 32 percent.

That is still low compared to say Latvia or Portugal -- both topped 70 percent in 2011 according to Eurostat data -- but it is a far cry from Communist Poland, when many unhappy couples stayed together solely because of the era's perpetual housing shortage, according to Zaremba.

Among last week's medal recipients was Krystyna Ceranska, an elegant 74-year-old whose parents and grandparents also received the award but whose twin brother is already on marriage number two.

The retired anaesthesiologist credits her marital success in part to growing up without this idea that break-ups are easy-breezy.

Her husband, a retired surgeon and ever the joker, has another theory.

"We both worked in medicine, so it's fair to say we spent half our life apart. When one was on call at the hospital, the other was at home, and vice versa," Wlodzimierz Ceranski, also 74, told AFP.

"Twelve days out of the month we didn't see each other. Maybe that's how the 50 years just flew by," he said, laughing.