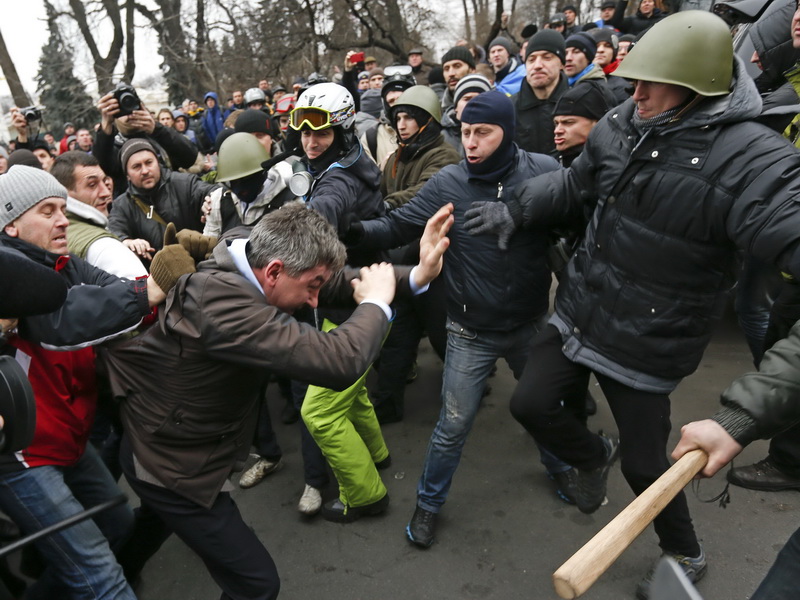 After Day Of Drama, Who Rules Ukraine?

REUTERS - After a day of high drama in which Ukraine's parliament voted to oust the president, who was left ruling the country? According to the parliament, it was certainly not Viktor Yanukovich. Shortly after the appointment of a speaker hostile to him, the assembly voted Yanukovich out of office on Saturday and called a presidential election for May 25. Although he looked shaken in a television interview, the burly 63-year-old leader said he was ignoring the vote and still considered himself head of state. "All the decisions they are taking now (in parliament) are illegal," he said. "I won't sign anything with gangsters who are terrorising the country ... I do not intend to resign." Even so, he looked a lame duck by the end of the day. Defections from his Party of Regions party robbed him of support in the parliament; the Interior Ministry which controls the police sided with the protesters; and the army made clear it was not rushing to his side. Who fills the vacuum is not entirely clear, partly because the parliament adopted a decision on Friday to revert to the 2004 constitution to take away some of the president's powers. He did not sign that measure. Under the 2004 constitution, the No. 2 is the parliamentary speaker, Oleksander Turchynov, an ally of Yanukovich's bitter enemy, Yulia Tymoshenko. Under the 1996 constitution, which was revived by Yanukovich in 2010 to strengthen the presidency, the No. 2 was the prime minister. That would mean power lay in the hands of acting Prime Minister Serhiy Arbuzov. But his government has a very short shelf life under the agreement Yanukovich reached with the opposition on Friday to end three months of protests. Under the agreement, brokered by the European Union, a national unity government is to be formed in about 10 days. The government kept a low profile on Saturday, staying out of the rapidly evolving events, except for issuing a statement saying it was working as usual and would "provide a fully responsible transfer of power" as planned.

"Right now the parliament is the only legitimate organ in the country," said Eduard Leonov, a parliamentary deputy from the far-right nationalist Svoboda party. The armed forces made clear they would not intervene on the president's behalf, saying they were "loyal to their constitutional obligations and cannot be pulled into domestic political conflict." The Interior Ministry sided with the protesters, saying it favoured "speedy change" and urging people to unite in ensuring security and an "independent, democratic and just" country. As for policy, there was no immediate word of any change although the shift in power towards Yanukovich's opponents could push Ukraine to resume its drive towards membership of the EU, reversing the U-turn that triggered the crisis. "I am sure that Ukraine will be a member of the European Union in the near future and this will change everything," Tymoshenko said after being freed from custody. But then, who leads the opposition? For now it is the three men who signed Friday's agreement with Yanukovich: Vitaly Klitschko, Arseny Yatsenyuk and Oleh Tyahnibok. But Tymoshenko's release could herald a struggle for supremacy among them. Friday's agreement could end up being their downfall as well as Yanukovich's, impressing few protesters because they failed to negotiateYanukovich's immediate departure. "They're all as bad as each other, the politicians. They're all in it for their own good," said Volodymr Feschak, a protester from Lviv.