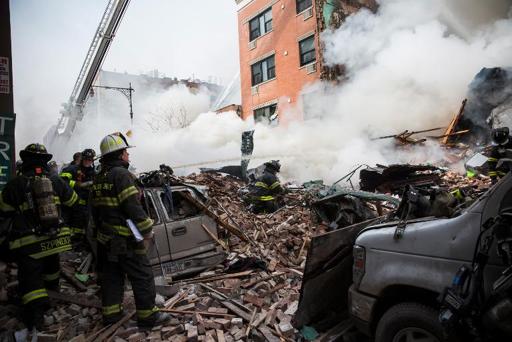 A residential building in Manhattan exploded and collapsed on Wednesday, killing at least one person and injuring 17 others as a serious fire engulfed the area in thick smoke, officials said.

The explosion struck a building at 116th Street and Park Avenue in the East Harlem neighborhood of New York, where witnesses said they were jolted awake by what sounded like an earthquake.

Mainline train services in and out of Grand Central terminal were suspended as a result of the incident next to its tracks.

Hundreds of police and firefighters were on site with emergency service vans and fire trucks, as a dense white column of smoke spewed into the sky next to the Metro-North railway line, an AFP reporter said.

A spokesman for energy company Con Edison told local TV channel NY 1 that it got a call from the building alerting them to a possible gas leak at 9:13 am, shortly before the blast.

Local residents also spoke of smelling gas in the area.

But Con Edison stopped short of confirming that the explosion had been caused by a gas leak.

"Obviously what we see is something that would be consistent (with a gas leak) but we can't say at this point what caused (the explosion)," the spokesman told NY1.

"It was an explosion and a building collapsed," a spokesman for New York Police Department told AFP. Scores of firefighters were dispatched to the scene.

Police told AFP one person was pronounced dead on arrival at hospital and that 17 other people had been injured.

"The call came at 9:34 am (1334 GMT). It is a residential building. The New York Fire Department is in the process of extinguishing the fire," another police spokesman added.

The New York Fire Department told AFP that more than 168 fire fighters and 44 different units had responded to the explosion.

Witness Robert Santiago told CBS that he was sleeping when all of a suddenly the explosion shook his bed and the floor.

"It smells very bad out here. It smells like rubble," he said.

"I thought the world was coming to an end, an earthquake or something like that. Terrible," he added.

Another witness told CBS that "a lot of people" lived in the six-storey building, including one of her friends.

"I'm scared, I'm scared. I came out to see the situation," she told the channel from behind the security cordon at the scene.

"I'm very scared. I'm shaking. I'm asthmatic and I'm not supposed to be here. I just came," she added.

Another witness who lived across the street told the channel that his relatives living further way also felt the blast.

"I saw a lady running with no shoes on. It was crazy. It was like a war zone," he said.

"First of all I thought it was an earthquake. I got calls from my family who felt it too and that was all the way up town. Man, it was crazy," he added.

The Metropolitan Transportation Authority said Metro-North trains had been suspended indefinitely in and out of Grand Central because of the building explosion and collapse.