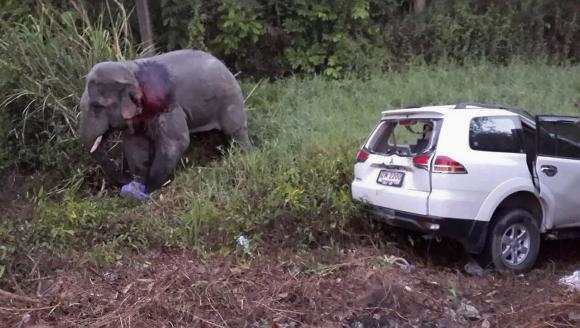 Six killed in Thailand in three-car crash caused by elephant

BANGKOK, March 12 (Reuters) - Six people were killed in Thailand in a three-vehicle accident when a van crashed into a wild elephant crossing a road in pre-dawn darkness on Wednesday, a hospital official said. All four occupants of the van, including a Singaporean man, were killed when the van crashed into the elephant and then veered off the road, police said. Two people died in a car that rammed into a truck that had stopped at the scene. "The elephant came down from the mountain where there's drought so it was probably searching for food," said police officer Teerawat Permwattanachaikul in the eastern province of Rayong. "You can't really see elephants at night because their colour is so dim." The elephant, part of a group of three, was badly hurt and later died, Teerawat said.