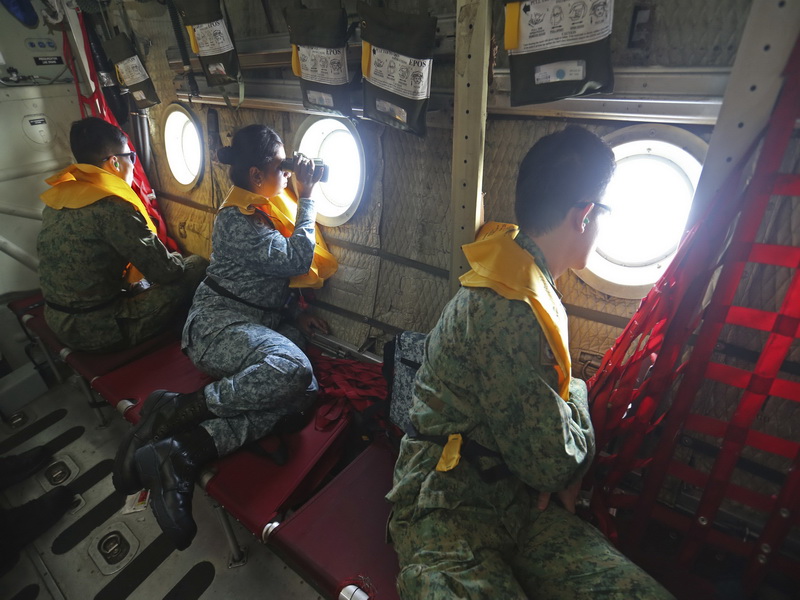 A Colorado-based company has put "crowdsourcing" to work in the search for a missing Malaysia Airlines jet, enlisting Internet users to comb through satellite images of more than 1,200 square miles (3,200 square km) of open seas for any signs of wreckage, the company said on Tuesday.

At least 600,000 volunteers have logged onto a website run by DigitalGlobe Inc to scan images the company uploaded from two of its five satellites covering an area between the Gulf of Thailand and the East Vietnam Sea where the jetliner was first believed to have vanished on Saturday.

The Boeing 777-200ER, with 227 passengers and 12 crew members on board, had taken off from Malaysia's capital, Kuala Lumpur, on a flight bound for Beijing when it lost contact with civilian air traffic controllers.

The Malaysia Airlines aircraft was initially thought to be roughly midway between Kota Bharu, a town on West Malaysia's eastern coast, and the southern tip of Vietnam, flying at an altitude of 35,000 feet (10,670 meters), when it disappeared.

The country consists of West Malaysia, a peninsula south of Thailand, and East Malaysia in northern Borneo.

Navy ships, military aircraft, helicopters, coast guard and civilian vessels from 10 countries have crisscrossed both coasts of West Malaysiain an effort to find the plane, deepening one of the most baffling mysteries in recent aviation history.

DigitalGlobe, based in Longmont, Colorado, began placing satellite images on its crowdsourcing website, Tomnod, on Monday and invited the public to join in the search by closely examining the pictures for any sign of the plane.

"We have hundreds of thousands of users combing pixel by pixel through our imagery. Even if we don't find something, that's an indication there might not be anything there," said Shay Har-Noy, the founder and director of research and development at DigitalGlobe.

He compared the search to trying to find a needle in a haystack.

"If you can rule out portions of that haystack as not having that needle, then that's a value as well," he said.

Volunteers and company analysts have spotted what appeared to be some patterns of unrecognizable objects in the sea that they could not explain but which might warrant closer scrutiny, he said.

"We've found a bunch of clues, no smoking gun yet," he said.

Questions about the plane's flight path have complicated the search. The crowdsourcing effort was launched just before Malaysia's militaryindicated the flight might have strayed far off course, which would have placed its last known location hundreds of miles from whereDigitalGlobe was collecting satellite pictures.

A Malaysian military officer told Reuters the flight appears to have turned around and made it to the Straits of Malacca, to the west of peninsular Malaysia, instead of to the northeast of the country where initial search efforts were conducted.

The flood of volunteers also caused some technical glitches for the project, Har-Noy said.

Examination of the satellite imagery by more than 600,000 visitors to the site generated 6.5 million map views and slowed the Tomnod platform, leading to complaints from some would-be participants who were thwarted from joining the search.

"It's been the most overwhelming response, considerably higher than any response we had in the past," Har-Noy said. "It's honestly slammed our servers."

DigitalGlobe's satellites will be in position to capture more imagery on Wednesday morning and may turn its focus to the Straits of Malacca, Har-Noy said. But he added the firm may look elsewhere, including over land masses, depending on the latest information from media reports and other sources.

DigitalGlobe, plans to at least double the amount of search imagery it uploads to Tomnod on Tuesday, Har-Noy said.

DigitalGlobe in 1993 became the first private company allowed by the U.S. government to create a satellite system for gathering high-resolution images for commercial sale. Besides the federal government, its customers include corporations and other countries.