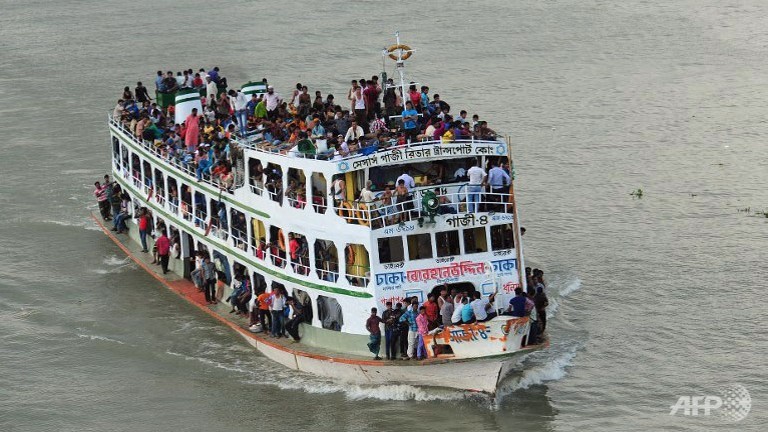 DHAKA, May 15 - A heavily-laden ferry capsized and sank in central Bangladesh on Thursday after being caught in a storm, leaving at least 10 people dead and hundreds more missing, police and officials said. Survivors of what is the latest in a string of ferry disasters to blight Bangladesh said the vessel had gone down in a matter of minutes, giving passengers little time to leap to safety. The exact number of passengers was not immediately known. It is common for ferries to carry many more than their official limit. "We are receiving confusing figures on how many passengers were on board when it sank, but the number could range from 200 to 350," district government administrator Saiful Hasan told AFP. "The toll now stands at 10," he said of the accident on the river Meghna in Munshiganj district, some 50 kilometres (30 miles) south of the Bangladeshi capital Dhaka. Local police chief Ferdous Ahmed also confirmed the recovery of the bodies, including at least two of whom were women. The vessel was travelling to the southern district of Shariatpur from Dhaka when it encountered problems and sank in the mid-afternoon, according to the police. "The ferry is completely under water. We are now trying to locate it," Ahmed said, adding that a salvage vessel has reached the spot, and fire service divers were on the way. Police in cooperation with locals were leading the rescue efforts, he said. The width of the river, the depth of the water and the strong currents were hampering the attempts. Hundreds of distraught relatives gathered on the banks of the river as the bodies were laid in lines in order to be identified, Ahmed said. The local online newspaper Banglanews24.com quoted a survivor of the accident, Abdur Razzaq, as saying that the boat was hit by the storm suddenly and sank within minutes. One of the divers who was taking part in the rescue effort was quoted by the Bangladesh Star as saying "many bodies" were still trapped inside the vessel.History of disaster Ferry accidents are common in Bangladesh, one of Asia's poorest nations which is criss-crossed with more than 230 rivers. Experts blame poorly maintained vessels, flaws in design and overcrowding for most of the tragedies. Storms known locally as Kalboishakhi often hit Bangladesh during the early summer months in the lead-up to the monsoon, which generally begins in the first week of June. Boats are the main form of travel in much of Bangladesh's remote rural areas, especially in the southern and northeastern regions. Some 150 people were killed in the same district in March 2012 after a overcrowded ferry carrying about 200 passengers sank after being hit by an oil barge in the dead of night. In 2011, 32 people were killed after a passenger vessel sank in the same river in the same district after colliding with a cargo ship. At least 85 people drowned in 2009 when an overloaded triple-decker ferry capsized off Bhola Island in the country's south. Naval officials have said more than 95 percent of Bangladesh's hundreds of thousands of small and medium-sized boats do not meet minimum safety regulations.