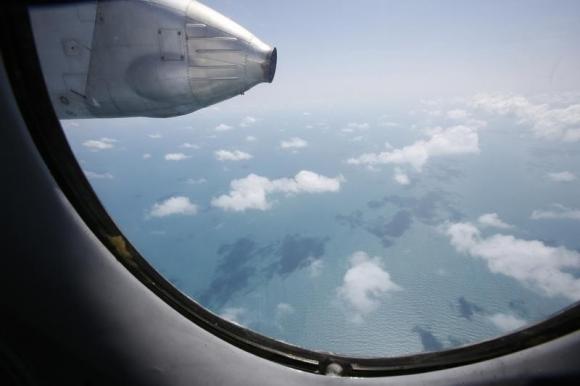 (Reuters) - Malaysia, China and Australia have agreed to re-examine all data related to missing Malaysia Airlines Flight MH370 to better pinpoint the search area, Malaysia's acting transport minister said on Thursday, as the hunt for the jet enters a new phase. The three countries also agreed at a meeting in Canberra last week to undertake a survey to map the ocean floor and procure more deep-sea search vehicles and other equipment to scour it, minister Hishammuddin Hussein told reporters in Kuala Lumpur. "I have briefed the Malaysia cabinet yesterday on the outcome of the meeting and it has been deliberated. I now have the mandate to announce that the details of the transition phase have been approved by the Malaysian government," he said. The Boeing 777 with 239 passengers and crew disappeared on March 8 during a scheduled service between Kuala Lumpur and Beijing, and is believed to have gone down in the Indian Ocean, off western Australia. About two-thirds of the passengers were Chinese nationals. Australia would have responsibility for procuring new search assets from commercial contractors, Hishammuddin said, while Malaysia and China would assign additional equipment and services for the search. Hishammuddin said he would discuss the possibility of more U.S. technical help with U.S. Defence Secretary Chuck Hagel at a summit in Singapore later this month. Hishammuddin said it was vital to carry out the undersea bathymetric survey to map the new search area so that the expensive and scarce deep-sea autonomous vehicles and towed sonar scanners could be deployed safely. "It is important the bathymetric survey and deep water search needs to be seamless," said Hishammuddin, who is also defence minister. The three governments would hold weekly video conferences to coordinate the search, starting on Monday.Search setback

Based on groundbreaking analysis of satellite "pings" sent from the aircraft before it presumably crashed, searchers believed they knew the approximate position of wreckage of the plane some 1,550 km (960 miles) northwest of Perth. The search was further narrowed on the basis of acoustic signals believed to have come from the aircraft's black box recorders before their batteries ran out. A massive search operation involving satellites, aircraft, ships and sophisticated underwater equipment capable of scouring the ocean floor has failed to turn up any trace of the plane. The United States said in early May that it would only contribute its sophisticated Bluefin-21 underwater drone for one more month, placing pressure on Australia, China and Malaysia to find funding for the next phase of the search. Officials have said that it could take a year to search the 60,000 sq km (23,000 sq mile) area where the plane is believed to have crashed, and questions about how to proceed and how to split the bill are growing. The search hit a fresh snag on Thursday after it was found the Bluefin-21 drone at the heart of the operation had been damaged, forcing what could be another lengthy delay. The Australian agency coordinating the search effort, now in its third month, said communications equipment on the sophisticated drone was damaged on its first day back after almost two weeks away for maintenance and resupply. The issue was discovered on Wednesday, the Joint Agency Coordination Centre (JACC) said, just two hours into the drone's first mission since returning to the search area in the Indian Ocean about 1,600 km (1,000 miles) northwest of the west Australian city of Perth. "Examination of the communications problem has established that a hardware defect exists in the transponder mounted on the Ocean Shield and that a defect may also exist in the transponder mounted on the Bluefin-21," a JACC statement said, referring to the Australian naval vessel towing the drone. "This inhibits the ability of the two devices to communicate with each other," it said, Parts to repair the Bluefin will not arrive in Australia until Sunday and it will take several days to reach the search area once repairs are completed.