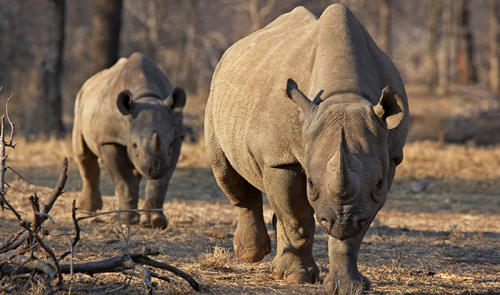 DVUR KRALOVE, Czech Republic, Sept 21 - A Czech zoo burned around 60 kilograms (132 pounds) of rhino horns on Sunday, part of an international campaign designed to highlight the plight of a species being driven towards extinction by poachers. Demand for rhino horn is high in parts of Asia, where it is an ingredient in traditional medicine and is also used as an aphrodisiac and as a status symbol for growing numbers of the newly wealthy. The Czech Republic has become a major transit point for rhino horn trafficking in recent years. Last year, Czech authorities seized 24 white rhino horns worth an estimated $5 million and charged 16 suspected members of an international ring smuggling the prized material to Asia. The Dvur Kralove zoo, some 150 km (90 miles) north-east of Prague, organised the burning on the eve of World Rhino Day on September 22. The international event was first announced in 2010 in South Africa, home to most of Africa's surviving rhinos. The demand for rhino horns shot up around that time after rumours that a Vietnamese minister's relative had been cured of cancer by the horn. There is no scientific evidence to support that claim. "I think it sends a really good signal to the rest of Europe that this zoo and other zoos and other organisations joining today are just not interested in perpetuating the trade in rhino horns," Tony Fitzjohn, founder of Wild Life Now and one of the leaders of the campaign to save rhinos, told Reuters. Other zoos in the Czech Republic, Slovakia and Britain are also due to burn rhino horns on Sunday, according to the website www.burnhorns.org. Kenya's Ol Pejeta, a wildlife conservancy, plans to open a graveyard for all the rhinos poached there in the last 10 years. "Every river, every lake starts with a drop of rain somewhere... It will have an impact but it takes brave and committed people to take those few first steps," Fitzjohn said. The Dvur Kralove zoo has a long track record of caring for rhinos. In 2009, it sent four northern white rhinos, half the known population left in the world, to Ol Pejeta in a last-ditch bid to save the species from extinction. In traditional Chinese medicine, the horn was used to treat maladies ranging from rheumatism to devil possession. Now, many newly rich Vietnamese consume it after a night of over-indulgence.