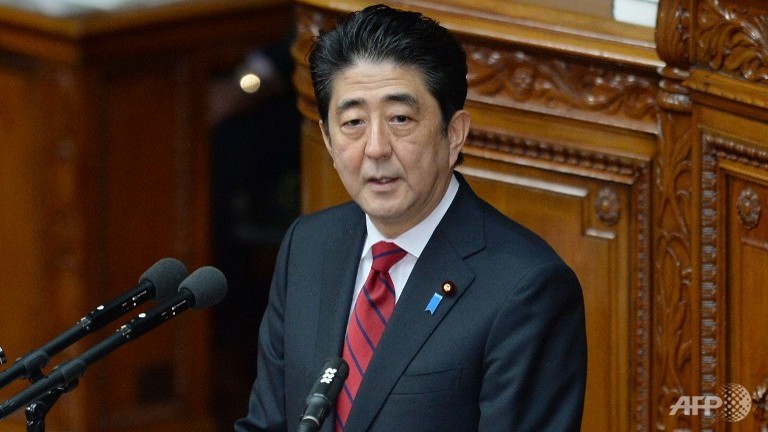 TOKYO, Sept 21 - Russian President Vladimir Putin and Japanese Prime Minster Shinzo Abe held telephone talks Sunday amid speculation about whether a visit by Putin will go ahead due to frictions over Ukraine. Local media reports say Putin's visit to Japan planned for this autumn is now uncertain following Tokyo's sanctions on Moscow over the crisis in Ukraine. "The leaders discussed the bilateral relationship between Japan and Russia, and the situation in Ukraine" in the telephone conversation proposed by the Russian side, the foreign ministry said in a statement. "Both leaders agreed to continue dialogue" on the issues, it said, adding Putin congratulated Abe on his birthday on Sunday. The Japanese government has never confirmed the timing of Putin's visit. A foreign ministry official in charge of Russian affairs declined to give further details of the telephone talks. Japanese Foreign Minister Fumio Kishida and his Russian counterpart Sergei Lavrov are unlikely to meet on the sidelines of upcoming UN General Assembly meetings in New York, apparently due to Moscow's reluctance, Kyodo News reported. Abe had actively sought to forge closer diplomatic and economic ties with Russia before it took control of the southern Ukrainian peninsula of Crimea in March. He would dearly love to solve a longstanding dispute over a group of islands seized by Soviet troops in the closing days of World War II, and still claimed by Japan. The dispute has prevented Tokyo and Moscow signing a formal treaty ending the war. In line with its western allies, Japan has announced sanctions on Russia over the Crimea annexation and over suspicions that Moscow is behind the instability by separatists in the east of Ukraine.