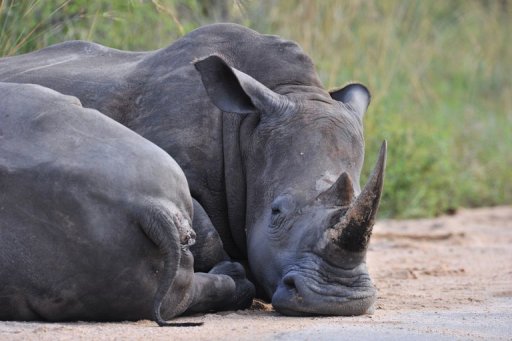 Pelham Jones bought his first rhinos for a private game park in South Africa some 25 years ago, completing his collection of the "Big Five" animals that visitors especially want to see.

It was a logical business decision, and profiting from the lucrative trade in rhino horn could not be further from his mind.

"And then the heartache began," he says.

Now, as South Africa faces a seventh straight yearly increase in rhino poaching, Jones is on a panel of experts studying an unusual proposal for battling the problem: legalising the trade in rhino horn.

He argues that this would pull the rug out from under crime syndicates by forcing down the price of rhino horn and removing the incentive to poach –- all while providing cash to plough back into conservation efforts.

Demand for rhinoceros horn -- which is made of keratin, the same material in hair and nails -- has skyrocketed in recent years, largely driven by the market in Asia, where the powdered horn is valued for its supposed medicinal properties.

The wildlife trade monitoring organisation Traffic says some 2,000 rhino horns leave Africa yearly -- the annual estimate was 1,000 between 2009 and 2012 -- each one fetching tens of thousands of dollars.

On the ground in South Africa, the impact is devastating, none more so than on the rangers and owners who find the rhinos' bloodied bodies with their horns and sometimes even their faces hacked off.

"When you stand next to a carcass, a dead pregnant female cow and a young heifer not 50 metres away, you weep," says Jones. "It's like the loss of a family member."

Internationally, the rhino horn trade was banned by the Convention on International Trade in Endangered Species of Wild Fauna and Flora (CITES) in 1977.

But a domestic trade continued within South Africa's borders for decades.

Then, in 2008, the country experienced a sudden increase in rhino poaching. The next year, the government passed a moratorium on the domestic trade.

It was supposed to close the loopholes that criminal syndicates were using to buy horns from local stockpiles before illegally exporting them.

But some experts say it may have exacerbated the problem.

According to a South African government report, the moratorium merely signalled to syndicates that rhino horn would become harder to obtain.

"The rhino-poaching crisis is being driven by a persistent demand for rhino horn that cannot be supplied through legal channels because of the national and international trade bans," it said.

"The ensuing high price of horn... provided strong incentives for poachers to risk their lives to acquire horns through poaching."

As of the beginning of November, poachers have killed 979 rhinos this year.

"We've tried everything else," says Jones, now head of the Private Rhino Owners Association. "From more guns to more boots to more cameras to more surveillance systems -- but the poachers are always one step ahead of us."

The idea of legalising the trade has divided the conservation world.

"There are two lobbies," says Dex Kotze, a conservationist who helped organise a global march for rhinos and elephants last month.

"The government is working with the pro-trade lobby to legalize rhino horn and there's a whole lot of people that simply believe it's not going to work."

Kotze is one of them. A businessman from the luxury goods industry, he keeps an eye firmly on the rising prices in Asia –- a kilogramme of rhino horn recently sold for $100,000 in Vietnam, double the price of gold, he says –- and believes the demand for rhino horn would far outstrip any legal supply.

Not to mention the mixed messages legalization would send to end-users of rhino horn, whose beliefs and behaviours conservationists are trying to change.

"The massive buildup of wealth in Asian countries is a huge deterrent to making the trade legal... The numbers just do not make business sense from that point of view."

There is also criticism that the pro-trade lobby is promoting an argument from which it stands to benefit: in 2010, government and private owners were estimated to have more than 15 tonnes of rhino horn stockpiled, about a third of it belonging to the state.

If South Africa does decide to pursue a legal rhino horn trade, it will have to win over two-thirds of member states at the next CITES conference in 2016.

"For any proposal to be confidently put on the table for other parties to even support, I think one needs to be clear with the facts," said Rose Masela, who heads the Department of Environmental Affairs' National Wildlife Information Management Unit.

"What are the benefits we stand to get?" she asked. "Some parties feel we will be encouraging demand."

In the end, according to Jones, no one is deluded into thinking that a legal rhino horn trade could be the silver bullet to end South Africa's poaching woes.

"It will come out of a combination of demand reduction, end-user education, a controlled supply," he said, suggesting "a transparent central selling organisation, with revenue going back to where it belongs: to save rhinos lives."