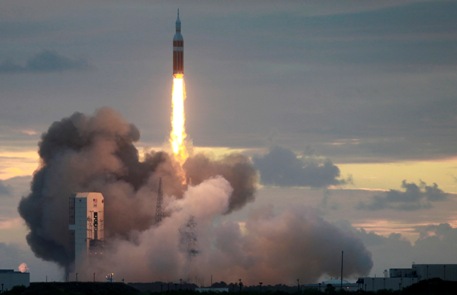 A U.S. spaceship designed to one day fly astronauts to Mars blasted off Friday from Cape Canaveral Air Force Station in Florida for a four-and-a-half hour unmanned trial run around Earth.

Riding atop a fountain of fire, the 24-story-tall Delta 4 Heavy rocket, the biggest in the U.S. fleet, lifted off at 7:05 a.m. EST (1205 GMT) and soared out over the Atlantic Ocean as it headed into orbit.

"The launch was just a blast... it was exciting," Mark Geyer, NASA Orion program manager, said in an interview on NASA Television.

As it headed into orbit, Orion shed its protective panels and a launch escape system that would be needed to help future crews escape an accident during the climb to space.

From an initial orbit as high as 554 miles above Earth, cameras aboard Orion relayed clear images of blue Earth against the blackness of space, a tantalizing preview of what the view will be when Orion reaches its peak altitude 3,600 miles (5,800 km) away.

From that perch, Orion will careen back toward the atmosphere, reaching speeds of 20,000 mph (32,000 km/h), to test if its heat shield can withstand 4,000 degree Fahrenheit (2,200 degree Celsius) temperatures of re-entry, close to what spaceships returning from lunar orbit will experience.

"I think it's a big day for the world, for people who know and like space," NASA Administrator Charles Bolden said shortly before launch."Everything may not go right, but everything that does go right means that we've bought down one more risk on this vehicle."

United Launch Alliance, a partnership of Lockheed Martin Corp and Boeing Co that builds and flies the rocket, delayed the launch by one day to resolve a problem with sluggish values in the rocket's first-stage propellant system.

NASA has been working on Orion, along with a new heavy-lift rocket, for more than eight years. The design of the rocket has changed, but Orion survived the cancellation of a lunar exploration program called Constellation to become the centerpiece of a new human space initiative intended to one day fly astronauts to Mars.

NASA has spent more than $9 billion developing Orion, which will make a second test flight, also without crew, in about four years.

A third mission, expected around 2021, will include two astronauts on a flight that will send the capsule high around the moon. Since the end of the Apollo moon program in 1972, astronauts have flown only a few hundred miles above Earth.