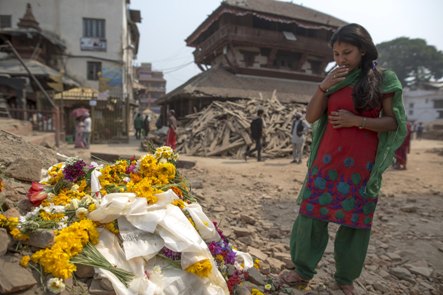 Hundreds of bodies may be buried in Nepal avalanche, official says

Body parts are strewn on the slopes of a mountain in Nepal, and up to 300 people, many of them foreigners, are believed buried there by an avalanche set off by last month's earthquake, an official said on Thursday.

In the same area, the bodies of two Russian diplomats have been found, Russia's RIA news agency reported on Thursday, quoting the press secretary of the Russian embassy in the Himalayan nation.

Both the diplomats had been working in the Russian embassy in Pakistan, the news agency said.

About 100 bodies were recovered in the area on Saturday and Sunday and Rimal had previously said about 120 more were buried.

But on Thursday he said the number could be as high as 300, including 110 foreigners. "There are body parts, broken limbs and pieces of flesh scattered in the area," he said.

Nepal's government has said 7,759 people were killed in the April 25 earthquake and more than 16,000 injured.

Langtang is on a trekking route popular with Westerners and had 55 guesthouses catering for visitors. The village was wiped out by the avalanche and it is not clear how many people were there at the time.

Only a fraction of the emergency funds the United Nations has requested for victims of the earthquake have come in, U.N. officials said on Thursday, as crises around the world put unprecedented demands on international donors.

Of the $415 million requested by the U.N. and its partners last week, just $22.4 million has been provided.

"It's a poor response," Orla Fagan, spokeswoman for the United Nations Office for the Coordination of Humanitarian Affairs, told Reuters.

Fagan attributed the shortage to "donor fatigue," citing more than a dozen other long-running international crises, such as the conflicts in Syria and Iraq, which are also making demands on donor nations.