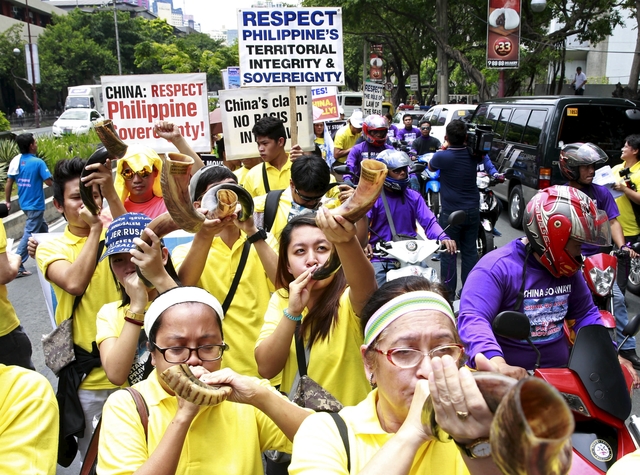 The Philippines will back a U.S. call to halt land reclamation in disputed areas of the East Vietnam Sea, the country's foreign minister said on Tuesday, despite China's insistence that the issue should not be raised at an upcoming meeting.

Foreign Minister Albert Del Rosario said the Philippines was ready to help de-escalate tensions in the disputed region, if China and other claimant states agreed to be bound by the same conditions.

Del Rosario added that the Philippines planned to raise the issue at the 48th ASEAN Foreign Ministers' Meeting, which kicked off in Kuala Lumpur on Tuesday.

His comments come a day after China said it did not want the contentious issue discussed at the Association of Southeast Asian Nations (ASEAN) gathering.

Neither China nor the United States are members of the regional body, but both will be represented during several days of talks in the Malaysian capital. U.S. Secretary of State John Kerry will be in Kuala Lumpur on Wednesday and Thursday.

"The Philippines fully supports and will pro-actively promote the call of the United States on the '3 halts': halt in reclamation, halt in construction, and halt in aggressive actions that could further heighten tensions," Del Rosario said in a statement.

"We will agree to be bound only if China and other claimant states agree to the same."

Though not on the official agenda, the East Vietnam Sea is among key issues likely to be discussed at the meeting, amid a backdrop of increasing tensions in the potentially energy-rich sea.

China has shown no sign of halting its construction of artificial islands in disputed waters.

Malaysia, the current chair of ASEAN, has said the topic was not off-limits and would be raised.

In opening remarks on Tuesday, Malaysia Foreign Minister Anifah Aman said that ASEAN should play a major role in reaching an "amicable" solution in the disputed waters.

China claims most of the East Vietnam Sea, through which $5 trillion in ship-borne trade passes every year. The Philippines, Vietnam, Malaysia, Taiwan and Brunei have overlapping claims.

China has accused the United States of militarizing the East Vietnam Sea by staging patrols and joint military drills, while the United States has called for a halt in China's artificial island building in the area.

On Tuesday, Chinese Foreign Minister Wang Yi said Scarborough Shoal, a rocky outcrop of the East Vietnam Sea, belonged to China, reiterating an earlier stance on its claims in the disputed area.

In a front page commentary on the overseas edition of the People's Daily, a senior academic said that the U.S. was teaming up with Japan to "disrupt" the East Vietnam Sea.

"Japan has been cooperating with the United States to hype up the 'China threat', making noise for their alliance to interfere in the [East Vietnam Sea]," Su Xiaohui, a senior researcher at the Foreign Ministry-backed China Institute of International Studies, wrote.

"This is not beneficial to regional peace and stability."