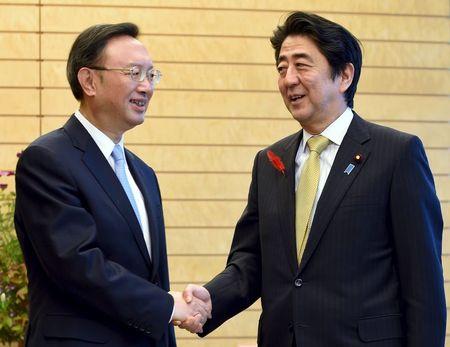 TOKYO - Japanese Prime Minister Shinzo Abe and China's top diplomat on Wednesday vowed to keep up a recent warming in ties, even though new irritants, such as a row over documents about the 1937 Nanjing Massacre, threaten the nascent recovery in relations.

Relations between the neighbours, haunted by the legacy of Japan's World War Two aggression and conflicting claims over a group of East China Sea islets, have warmed after Abe met Chinese President Xi Jinping twice since last November.

But a fresh chill seemed likely after China last month announced the arrest of two Japanese for spying, and Japan this week threatened it might halt funding for UNESCO over a dispute about documents related to the 1937 Nanjing Massacre.

UNESCO included a dossier submitted by Chinese organisations in the latest listing of its "Memory of the World" programme, which aims to preserve important historical materials.

"China and Japan are important neighbours to each other," Chinese State Councillor Yang Jiechi said at the start of his meeting with Abe on Wednesday.

"We would like to step closer to Japan and constantly promote the improvement and development of bilateral ties."

He also told Abe the development of healthy and stable relations was in the interest of both countries, China's foreign ministry said in a statement after the meeting.

"I've heard that you had a good meeting with Mr. Yachi," Abe told Yang before Wednesday's event was closed to reporters. "By holding such high-level talks repeatedly, I would like to bring forward relations between the two countries."

These events include a G20 summit in Turkey and Asia Pacific Economic Cooperation (APEC) summit meetings in the Philippines, both set for November.

Abe expressed "serious concerns" over Chinese vessels' activities in the East China Sea, and both agreed to push for early adoption of a communication mechanism, now in the works, to avert misunderstandings between their militaries, Seko said.

Patrol vessels and fighter jets from both Japan and China have been shadowing each other on and off near the disputed East China Sea islets, raising fears that a confrontation could result in a clash.