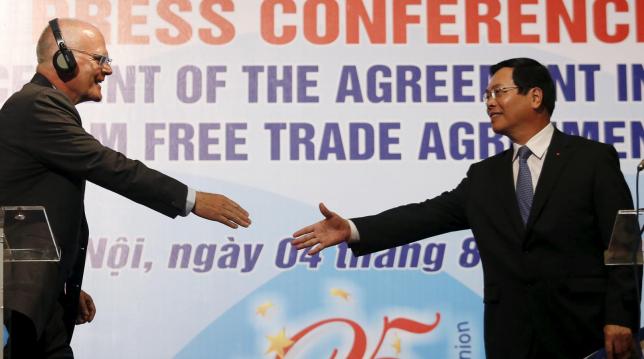 Why Vietnam, Southeast Asia and Europe need each other

Editor’s note: Dr. Truong-Minh Vu, director of the Center for International Studies at the University of Social Sciences and Humanities in Ho Chi Minh City, explains in this story written exclusively for Tuoi Tre News why Vietnam, Southeast Asia and Europe need each other to deal with rising tension in East and Southeast Asia.

Is Europe an option for Southeast Asian heads of state in their search for support in the East Vietnam Sea conflict?

Since the 2003 publication of its security strategy, to guide its greater role on the world stage, the EU claims to have developed a distinct security identity of its own.

Over the years, much has been done to substantiate this goal, which includes, among other things, a follow-up document entitled Common Security and Defense Policy (CSDP), as well as the nomination of a High Representative to streamline and oversee the union’s external affairs.

For a long time disillusioned Southeast Asian decision-makers have discarded Europe as a power in the region and shied away from developing any kind of meaningful expectation vis-à-vis Brussels.

For their part, European institutions have long suffered from a lack of support and resources, not to mention a coherent strategy to implement proper policies towards their East and Southeast Asian partners. This has in turn resulted in mishaps and misunderstandings.

But a recent European pivot towards Asia may put Brussels back on the radar of Asian chancelleries, though on a more realistic basis.

Much like the U.S., the EU has come to realize the difficulties of maintaining the momentum for such a pivot in times of strained public budgets and crises closer to home.

Yet, as tensions rise in the waters of the East Vietnam Sea, Europe’s diplomatic contributions should not be downplayed.

First, while the EU can adequately be described as a political dwarf in Asia, it remains an economic giant with powerful leverage.

Europe has a major economic stake in the stability of the East Vietnam Sea, where most of its trade to and from East Asia transits.

In addition, while there is no comprehensive EU strategy for the East Vietnam Sea, its policies are based on a “three no’s and four yes’s” position: yes to supporting multilateral initiatives for peace and stability; yes to diplomatic and peaceful solutions to conflicts among parties; yes to playing a co-mediator role based on international law; yes to transferring the best practices and ideas based on the EU’s experience; no to military intervention; no to a leading role in diplomacy; no to singling out one particular stakeholder.

These positions are based on a realistic assessment of what the EU is, what its capabilities are, and where its legitimacy and added-value lie.

The EU and Germany are not expected to play any military role in East Asia.

But German foreign policymaking should encourage the EU to come up with a more coherent strategy vis-à-vis Southeast Asia from a global perspective.

The EU bases its own understanding of the situation in the region on a non-confrontational platform: it considers its engagement of ASEAN as strategic in scope, and already has a strategic partnership with China.

The recent escalation of the territorial disputes in the East Vietnam Sea has resulted in the increasing militarization of Southeast Asia.

This process will have a considerable impact on how EU countries will navigate the complex waters and its interests in the region.

If freedom of navigation and regional stability are central to EU strategic thinking, then it makes eminent sense for the EU to leverage its power relationships in this region.

EU and German diplomacy and businesses can indeed bring to the Vietnam and ASEAN table one thing other external partners cannot, or at least not on the same terms: defending the rule of international law and harnessing epistemic exchanges based on the EU experiences.

As a response to China’s growing assertiveness, regional countries have dramatically increased their commitment to the promotion of the rule of international law in the region.

Beijing’s “nine-dash line” – the extensive demarcation line used by the China for its claims in the East Vietnam Sea – has been formally challenged by the Philippines under Annex VII of the United Nations Convention on the Law of the Sea (UNCLOS).

The Philippines, Vietnam and other regional countries have also challenged Chinese claims through their submissions to the Commission on the Limits of the Continental Shelf (CLCS) and their notes verbales to the UN Secretary General.

For those countries relying on UNCLOS to counterbalance China’s ambitions, the EU’s interpretation and support for the rule of international law and the peaceful settlement of disputes could therefore have both a symbolic and political impact that could hardly be achieved otherwise.

Knowledge transfer is another major asset sought by Southeast Asian countries from Europe.

The EU can share the best practices in conflict prevention and management, and in the implementation of common policies, learning from such things as its fishery policy.

Coastal nations can also learn from the European experiences in joint exploitation of natural resources, as was done in the Northern Atlantic and Baltic Sea.

Cooperation or joint development in the East Vietnam Sea requires not only the best practices from the EU, but also technical equipment, training and skills transfer.

Vietnam, Southeast Asia and Europe need each other in dealing with rising tensions in the East and Southeast Asian regions: freedom of navigation and prevention of military conflicts can best be guaranteed through promoting the rule of international law, harvesting the economic benefits of enhanced cooperation and sharing the best practices of conflict prevention in disputed maritime zones.