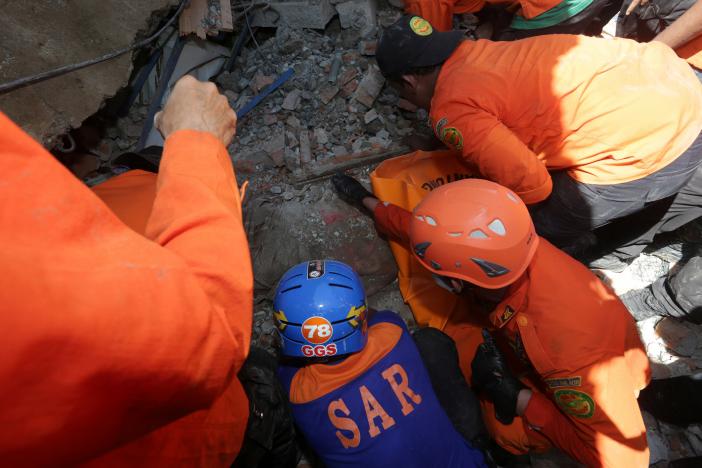 At least 25 people were killed and dozens were missing after a magnitude 6.4 earthquake hit the northern Indonesian province of Aceh on Wednesday, officials said, collapsing buildings and sending panicked residents fleeing into the streets.

Indonesian search and rescue teams used earth movers to clear rubble and reach what authorities believed were dozens of victims trapped underneath.

"Search and rescue teams have found 25 dead victims and 26 seriously injured," Sutopo Nugroho of the national disaster management agency said in a statement.

Khairul Nova, an official at the Aceh search and rescue agency, said: "Dozens are missing but we don't have accurate data on the total yet."

Aceh, on the northern tip of Sumatra island, was devastated by a massive earthquake and tsunami centered on its western coast near the provincial capital, Banda Aceh, on Dec. 26, 2004.

Wednesday's quake hit the east coast of the province, about 170 km (105 miles) from Banda Aceh.

Images on television and social media showed victims being rushed to hospital, flattened buildings and fallen electricity poles, and people gathering outside at street corners.

"The earthquake was felt strongly and many people panicked and rushed outdoors as houses collapsed," Nugroho said.

Heavy machinery was being used in the search for victims, said Risky Hidayat, another search and rescue official in Aceh.

A volunteer for the Indonesian Red Crescent in Pidie Jaya regency in Aceh described scenes of heavy damage and said many people had been injured.

"There isn't enough medical staff around," the Red Crescent's Muklis, who like many Indonesians uses one name, told TVOne.

At least five aftershocks were felt in the hours after the initial quake, the disaster management agency said.

The region suffered massive destruction in 2004 when a 9.2 magnitude quake triggered a tsunami that wiped out entire communities in Indonesia and other countries around the Indian Ocean.

Indonesia was the hardest hit, with more than 120,000 people killed in Aceh alone.