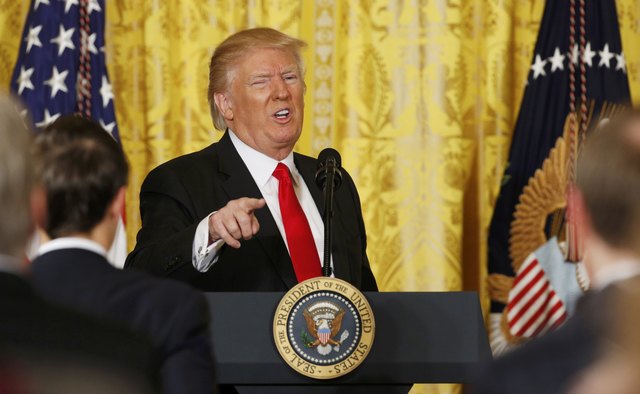 Editor's Note: Dr. Terry F. Buss is a fellow of the U.S. National Academy of Public Administration. He wrote this piece exclusively to Tuoi Tre News.

Other less critical main stream and conservative media were invited to attend.

The media exploded with complaints that Trump was attempting to control the free press.

Trump is at war with the media, accusing it of biased reporting, propagation of fake news, use of anonymous sources, and publication of damaging leaks. Trump even calls the media an “enemy of the people.”

Trump has reason to complain.

Since he began his campaign for president over a year ago, the news media has launched a comprehensive, unprecedented push to keep Trump from being elected, then getting him to resign, and failing that, making it difficult to govern.

NY Times reporter Jim Rutenberg captured the strategy, calling for the news media to “throw out the textbook on American journalism,” and go after Trump with any means possible. The news media has followed suit.

Trump probably relishes the assault: as 19th century con man P.T. Barnum opined, “There is no such thing as bad publicity.”

Nixon and Johnson set the stage

Understandably nearly every president in the past 100 years has gone to war with the press. That seems to be a universal response by most presidents who feel they are being unfairly treated by the news media.

Presidents Richard Nixon and Lyndon Johnson were models of acrimonious press relations. Nixon so disliked the news media that he had vice president Spiro Agnew publically attack the press. Agnew immortalized the phrase referring to the press as “nattering nabobs of negativism.”

The book, Poisoning the Press, by Mark Feldstein, reports that Nixon directed his aides to “pick the 20 most vicious Washington reporters, put out damaging information about them, and “just kill the sons of b*tches.”

Johnson’s tenure in office suffered from the American War in Vietnam and widespread civil unrest. Journalists covering the Johnson administration soon coined the infamous phrase, “credibility gap,” to highlight the failure of the war versus the “untruths” about it told by the administration.

Kathleen Turner in the Presidency and the Press argues that Johnson’s inability to capture press support led to his downfall. Likewise, Nixon’s resignation in disgrace as a result of the “Watergate Scandal” resulted from a vengeful press.

Obama waged war on the media

President Barack Obama extended the war on the media to new levels.

He failed when the media rallied in support—ironically with the exception of CNN—of Foxnews.

Throughout his presidency, Obama blamed Foxnews for some of his policy failings: most recently he blamed it for Hillary Clinton’s defeat by Trump. Obama attempted to prosecute a Foxnews reporter, James Rosen, for publishing leaks. Other reporters at the NY Times and AP Wire have been investigated to intimidate.

The news media, made up largely of his supporters, often railed against Obama’s poor treatment of the press. In 2014, Jill Abramson, executive editor of the NY Times, complained that the Obama White House was the “most secretive” she had ever covered.

According to Jon Marshall of the Atlantic, Obama “blacklisted” journalists when he objected to their reporting, delayed interviews with officials causing reporters to miss deadlines, directed staff not to talk to certain reporters, and timed release of news stories to inconvenience reporters.

Obama pioneered bypassing the main stream media using social media, something that Trump has taken to even greater extremes on Twitter.

Clinton, Obama’s failed successor carried on the Obama tradition. Clinton did not hold a press conference for nearly an entire year while running for president. She also kept reporters “corralled” in roped-off areas to limit their access.

Trump has already in four weeks as president exceeded Obama.

Obama and Trump have shown that presidents can effectively manipulate the press. Both are dangerous.

The press supported Obama so coverage was positive when perhaps it should not have been.

The press detests Trump so coverage is much more critical than deserved.

Neither was informative. It is likely to get worse. The American people and their democracy will be much the worse.