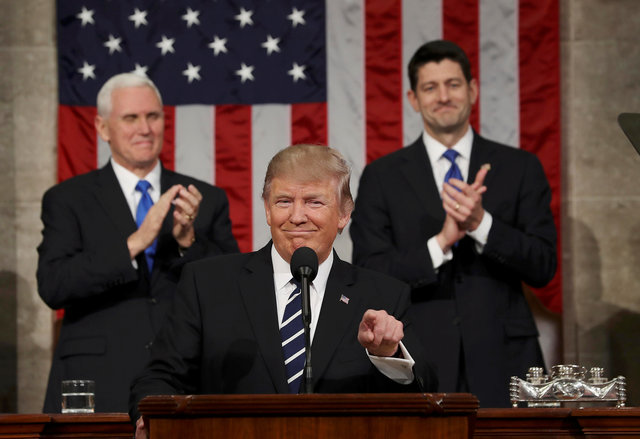 Editor's Note: Dr. Terry F. Buss is a fellow of the U.S. National Academy of Public Administration. He wrote this piece exclusively to Tuoi Tre News.

A subject of great debate across America: which President Trump would show up at his inaugural address to Congress—the frenetic, out of control, rabble rousing, extemporaneous, Twitter spewing, narcissist campaigner or the diplomatic, polished, dignified, conventional president.

Trump delivered the best speech of his career.  A CNN anti-Trump panel—that has been convened for every Trump event and that has never said a kind word about him—rated the speech very positively. Foxnews, often a Trump, headlined the speech as a “New Chapter of Greatness.”

Whether Trump’s stellar performance translates to an improvement in his abysmally record-low presidential approval ratings—now at only 40 percent—is an open question.

Trump is off to a great start: a poll conducted of CNN’s audience who are mostly anti-Trump showed that 78 percent of respondents viewed the speech positively and 69 percent felt his policies would move country in right direction.

Trump clearly laid out his accomplishments over his first 40 days in office and the agenda he intends to pursue in future days.

Unlike his past campaign speeches that were often loaded with false facts, contradictions, ambiguities and attacks, this speech was precise.

The tone of Trump’s speech was much more presidential than anything in the past. The NYTimes begrudgingly in their headline coverage said “Trump Softens Tone in Outlining Goals,” which is high praise given their usual coverage.

But Trump was not measured or diplomatic in “calling out” those who he believes threaten American values and peace.

Trump opened his speech with a nod to contributions of Black Americans as part of Black History Month in an effort to heal past wounds. He then directly attacked extremists who were persecuting Blacks and Jews. Of late, Trump has been accused of not speaking out against extremists.

Trump praised the nation’s police, calling on Americans to work with them rather than abuse them. This was a direct repudiation of the group, Black Lives Matter, who have been calling for violence against police and who have been leading major protests against Trump across the country. Trump was signaling that he would not be intimidated.

President Obama pioneered the movement that refused to call terrorists, Radical Islamic Terrorists, fearing that doing so would offend moderate Muslims. Trump was having none of that: he specifically said that he would not be cowed by intimidation. White House insiders indicated that he would likely soften this stance in the future.

Trump reiterated the themes make America Great and America First. He pronounced that he was not responsible for the world, but was elected to work for Americans. He clearly wanted to send a message to the world that he was serious. He took credit for getting European countries to contribute their fair share to NATO, for example.

Trump called for Democrats to cooperate with his administration to solve the nation’s problems. But, he literally pointed at them, stating that “fighting over trivial matters” had to stop. Trump may want cooperation, but this was probably not a good tactic. Democrats looked stunned.

Democratic congressional women came to the speech wearing all white. They did so to present a show of force against Trump’s anti-women policies, particularly Planned Parenthood, which is a major provider of abortions and a target for budget cuts. They wore white because women campaigning for the right to vote in the 1900s did so. Someone should have told them that these women were against abortion.

Trump couldn’t resist his usual victory dance. He spoke about how he captured the hearts and minds of forgotten Americans and how he was giving them voice.

Most presidents invite guests who represent an issue they wish to highlight in their speeches.

Trump called out several people, but recognition of the widow of a special operations soldier, William Owen, who recently died in Yemen on a mission, was the highlight of the evening.

The entire Congress stood and applauded for probably five minutes, a likely record for such speeches. Van Jones, one of the most vociferous critics of Trump on CNN, commented that “this was the moment that Trump became president.”

Even though a Republican, Trump was never a conservative. The speech reiterated his antipathy toward trade. He emphasized his commitment to bringing jobs back to America and supporting business, actions most conservatives view as “crony capitalism.”

And perhaps the greatest breaking news in the speech, Trump indicated that he was willing to compromise on immigration, suggesting that he favored a path to citizenship for illegal aliens. Mitch McConnell, leader of the Senate, in an interview after the speech did not appear enthusiastic.

Trumps’ priorities were clearly laid out. He intends to increase defense spending by 10 percent or $54 million, he will promote charter schools and school choice especially for poor minorities children, and he will create a “points based” immigration system like Australia’s that takes in immigrants who can support themselves. He finally made clear that he supports reforming health clear along the lines favored by many Republicans.

Trump said very little on foreign policy even though he has been preoccupied with it. He did not mention Iraq or Afghanistan, but did proclaim his support for Israel. Likewise, Russian relations, for which he has been roundly criticized was not mentioned, neither was China or North Korea.

The “fly in the ointment” in his speech was how he was going to pay for this. He said nothing. But, that is not unusual. I can’t recall any president saying how he would pay for his agenda. Based on recent discussions, Trump expects that rapid growth in the economy and cuts in programs like the Environmental Protection Agency will do the job. The biggest items in the US budget, Social Security and Medicare, will not be touched.

So, Trump’s speech was a good start to his presidency. I wish he would have abandoned the policymaking by Twitter approach and adopted this presidential one instead. Trump would probably say that were it not for Twitter and his extreme style, he would not have been elected. Who knows?