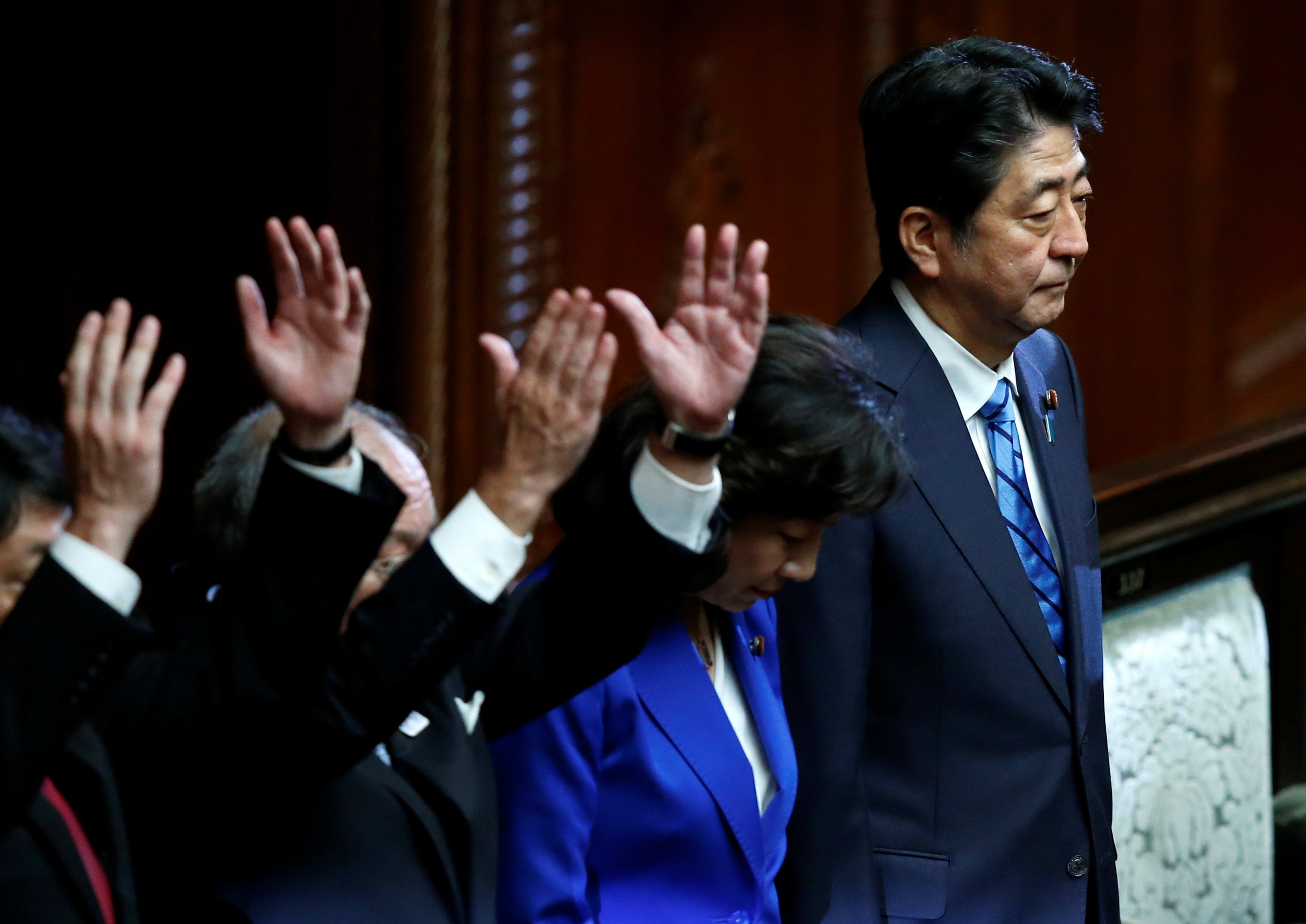 Abe, a conservative who returned to power in 2012, is hoping a boost in his voter support in recent months will help his Liberal Democratic Party-led (LDP) coalition maintain a simple majority. It currently holds a two-thirds "super" majority. Koike's new Party of Hope -- only formally launched on Wednesday -- has upended the election outlook after the former LDP member announced she would lead the group herself.

"This will be a tough battle, but it's all about how we will protect Japan, and the lives and peaceful existence of the Japanese people," Abe told a group of lawmakers. The cabinet will formally decide the date of the poll later on Thursday.

A number of opposition lawmakers boycotted a session at which the lower house was dissolved to protest Abe's calling the election and creating a potential political vacuum at a time when tensions are high with North Korea.

Koike, a media-savvy former defence minister often floated as a candidate to become Japan's first female prime minister, said on Wednesday she would not run for a seat herself, but speculation that she will persists.

A survey by the Mainichi newspaper showed 18 percent of voters plan to vote for Koike's Party of Hope compared to 29 percent for Abe's ruling Liberal Democratic Party (LDP).

An Asahi newspaper poll showed 13 percent planned to vote for Koike's party versus 32 percent for the LDP. Both surveys asked voters their preference for proportional representation districts where ballots are cast for parties rather than specific candidates.

"It is unavoidable that Abe is going to lose some seats to the Party of Hope, and while the most likely scenario is that he will retain a majority, if he loses too many his ability to implement policy will be diminished," said Yuji Saito, director of the foreign exchange division at Credit Agricole Bank in Tokyo.

Abe's personal ratings have risen to around 50 percent from around 30 percent in July, partly on the back of his leadership during the current North Korea crisis.

But opposition parties charge he called the election to escape questioning in parliament about suspected cronyism scandals that sliced his support to below 30 percent in July.

The emergence of Koike's party - which she describes as pro-reform and conservative - has thrown the main opposition Democratic Party into turmoil. The Democrats are struggling with defections and single-digit ratings and now appear in danger of being absorbed by the Party of Hope.

Democratic Party leader Seiji Maehara will propose that the party allow its members to run under the Party of Hope flag, domestic media reports said.

The proposal could end up splitting the party, an often fractious mix of conservatives and liberals whose rocky 2009-2012 reign tainted its image with many voters.

Koike, 65, defied the LDP to run successfully for Tokyo governor last year and her novice local party then crushed the LDP in a metropolitan assembly election in July.

Her Party of Hope shares policy space with the business-friendly LDP, but Koike has staked out different stances on two issues likely to appeal to voters.

She wants to freeze a planned rise in the national sales tax to 10 percent from 8 percent in 2019. Abe says he will raise the tax but spend more revenue on child care and education instead of paying back public debt.

Koike is also calling for Japan to abandon nuclear power, while Abe's government plans to keep atomic power as a key part of the energy mix despite public worries about safety after the 2011 Fukushima nuclear crisis.

Koike has also criticised Abe for risking a political vacuum by calling the snap poll at a time of rising regional tensions over North Korea's nuclear and missile programmes.

Recent reforms will reduce the number of lower house seats to 465 from 475 in the coming election.