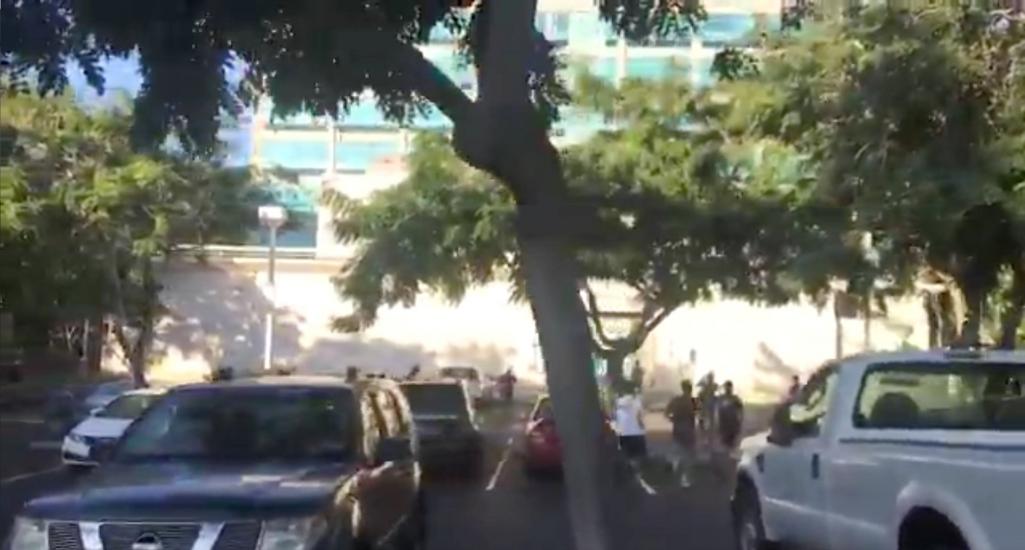 HONOLULU -- An emergency alert was sent mistakenly on Saturday to Hawaii’s residents warning of an imminent ballistic missile attack when an employee at the state emergency management agency pushed the “wrong button,” Hawaii’s governor said.

State officials and the U.S. military’s Pacific Command confirmed that there was no actual threat to the state. But for more than a half hour, while the agency struggled to retract the warning, panicked Hawaiians scrambled to find shelter.

The mistaken alert stated: “EMERGENCY ALERT BALLISTIC MISSILE THREAT INBOUND TO HAWAII. SEEK IMMEDIATE SHELTER. THIS IS NOT A DRILL.” The alert, sent to mobile phones and aired on television and radio shortly after 8 a.m., was issued amid high international tensions over North Korea’s development of ballistic nuclear weapons.

Governor David Ige told a news conference he was “angry and disappointed” over the incident, apologized for it and said the state would take steps to ensure it never happens again.

“What happened today was totally unacceptable,” the Democratic governor said.

Ige said the alert was sent during a employee shift change at the Hawaii Emergency Management Agency, and that the state had no automated process to get out the word that it was a false alarm. Vern Miyagi, the agency’s administrator, called it “human error.”

Stacey Bow, 56, of Honolulu, said she received the emergency alert on her smart phone. She awakened her 16-year-old daughter with the news. “She became hysterical, crying, you know, just lost it,” she said.

Ige said the emergency management agency after the incident ordered a change in its procedures requiring two employees, not just one, to send out such an alert in the future. He said such shift changes occur three times a day every day of the year.

Miyagi, who said Hawaii would have only 12 to 13 minutes of warning in an actual attack, declined to say what action would be taken against the employee. Miyagi said the agency routinely tests its emergency alert system and that employee thought he was conducting a test, not realizing he had transmitted the warning with a two-step process on a computer screen until receiving it on his own cellphone minutes later.

“There is a screen that says, ‘Are you sure you want to do this?'” Miyagi said, adding that the employee “feels terrible about it.”

Miyagi, who took responsibility for the incident, said the mistake “should have been caught.”

“This will not happen again,” he added.

Bow said of the person responsible for issuing the alert, “I imagine that person is clearing out their desk right now. You don’t get a do-over for something like that.”

The U.S. Federal Communications Commission, which has jurisdiction over the emergency alert system, announced it was initiating a full investigation. Earlier this week, FCC chairman Ajit Pai said the agency would vote at its January meeting to enhance the effectiveness of wireless emergency alerts, which have been in place since 2012.

Hawaii, a chain of islands in the Pacific Ocean, has a population of about 1.4 million people, according to the U.S. Census Bureau, and is home to Pacific Command, the Navy’s Pacific Fleet and other elements of the American military.

Hawaii’s economy depends heavily on tourism. At the news conference with Ige and Miyagi, a Hawaii tourism official expressed concern about the impact the incident might have on attracting visitors to the state.

In November, Hawaii said it would resume monthly statewide testing of Cold War-era nuclear attack warning sirens for the first time in at least a quarter of a century, in preparation for a possible missile strike from North Korea.

The governor said some sirens went off on Saturday after the false alarm.