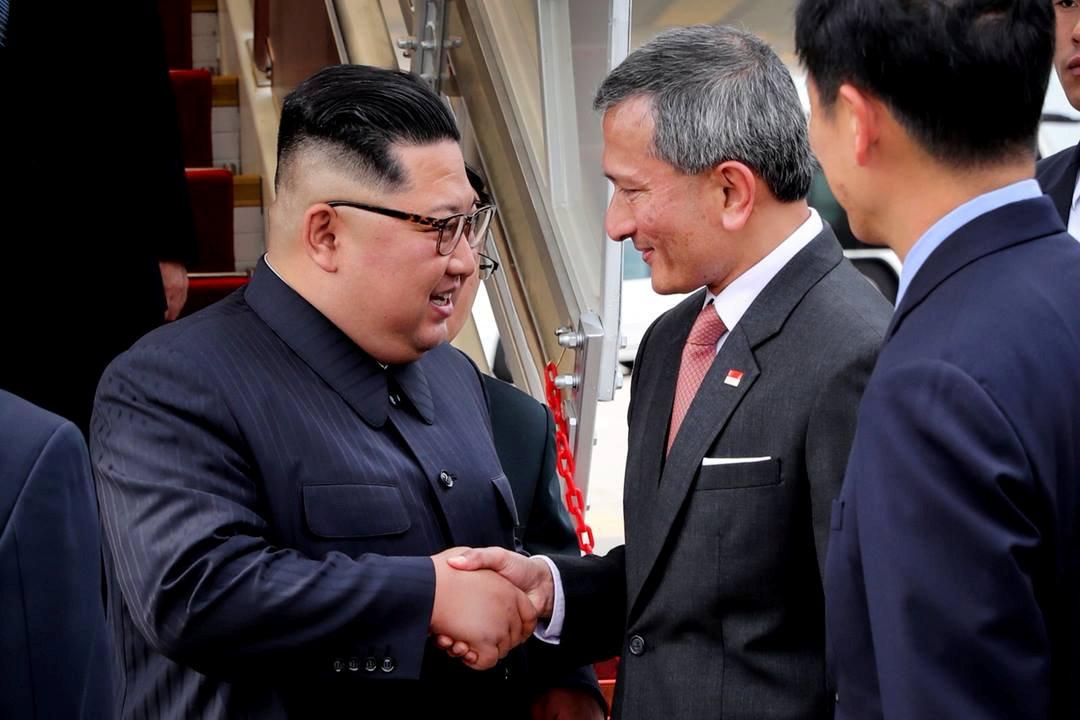 Singapore -- North Korean leader Kim Jong Un arrived in Singapore Sunday for an unprecedented summit with Donald Trump, an attempt to address the last festering legacy of the Cold War, with the US president calling it a "one time shot" at peace.

Pyongyang's nuclear arsenal -- which has seen it subjected to several sets of UN Security Council sanctions and threatened with military action by the Trump administration -- will top the agenda.

Bringing the Korean War to a formal end 65 years after hostilities ceased will also be on the table at the first-ever summit between a North Korean leader and a sitting president of its "imperialist enemy".

Kim arrived in Singapore on board an Air China 747 that according to flight tracking website Flightradar24 took off from Pyongyang in the morning ostensibly bound for Beijing, then changed its flight number midair and headed south.

The city-state's foreign minister Vivian Balakrishnan tweeted a picture of himself shaking hands with Kim at Changi Airport, and the North Korean leader was driven into the centre in a stretch Mercedes-Benz limousine, accompanied by a convoy of more than 20 vehicles.

Kim was due to meet Singaporean President Lee Hsien Loong later on Sunday, the city-state's foreign ministry said, while Trump was flying from Canada on board Air Force One after leaving the G7 summit early.

'Not just a photo op'

Tuesday's Singapore meeting is the climax of the astonishing flurry of diplomacy on and around the Korean peninsula this year, but critics charge that it risks being largely a triumph of style over substance.

Washington is demanding the complete, verifiable and irreversible denuclearisation (CVID) of the North, while Pyongyang has so far only made public pledges of its commitment to the denuclearisation of the peninsula -- a term open to wide interpretation -- while seeking security guarantees.

"The success will be in the shutter clicks of the cameras," he said. "They both get what they want."

Trump insisted last week that the summit would "not be just a photo op", saying it would help forge a "good relationship" that would lead to a "process" towards the "ultimate making of a deal".

But as he embarked for Singapore he changed his tune, calling it a "one-time shot" and adding he will know "within the first minute" whether an agreement will be possible.

"If I think it won't happen, I'm not going to waste my time," he said.

He has also dangled the prospect of Kim Jong Un visiting Washington if the meeting goes well.

But even the merit of the event itself -- long sought by the North, and which Trump apparently impulsively agreed to in March, reportedly without consulting his advisers -- has been called into question.

"People call it a historic summit but... it is important to understand that this summit was available to any US president who wanted to do it and the point is no US president wanted to do this, and for good reasons," said Christopher Hill, a former lead US nuclear negotiator with North Korea.

The two countries have been at loggerheads for decades.

The North fought the South in 1950 and the ensuing war saw US-led UN troops backing Seoul fight their way to a stalemate against Pyongyang's forces which were aided by Russia and China, before the conflict ended in stalemate and an armistice which sealed the division of the peninsula.

Sporadic provocations by the North have continued while Pyongyang has made increasing advances in its nuclear arsenal, which it says it needs to defend against the risk of a US invasion.

Last year it carried out by far its most powerful nuclear test to date and launched missiles capable of reaching the US mainland, sending tensions soaring to a level unseen in years as a newly-elected Trump traded threats of war and colourful personal insults with Kim, with Trump dubbed a "dotard" and Kim "Little Rocket Man".

But the South's Winter Olympics in February catalysed a flurry of diplomatic moves as Seoul's dovish leader Moon Jae-in sought to bring the two sides together.

Kim has met twice with both Moon and Xi Jinping, the president of China, long the North's most important ally.

Pyongyang has taken some steps to show sincerity, returning US detainees and blowing up its nuclear test site.

US Secretary of State Mike Pompeo said last week that progress was being made in bringing the two sides together in their understanding of denuclearisation.

But Trump -- for whom a major accomplishment would bolster his position ahead of midterm elections in November -- baffled observers when he said he did not think he had to prepare "very much" for the summit.

"It's about attitude," Trump said. "So this isn't a question of preparation."