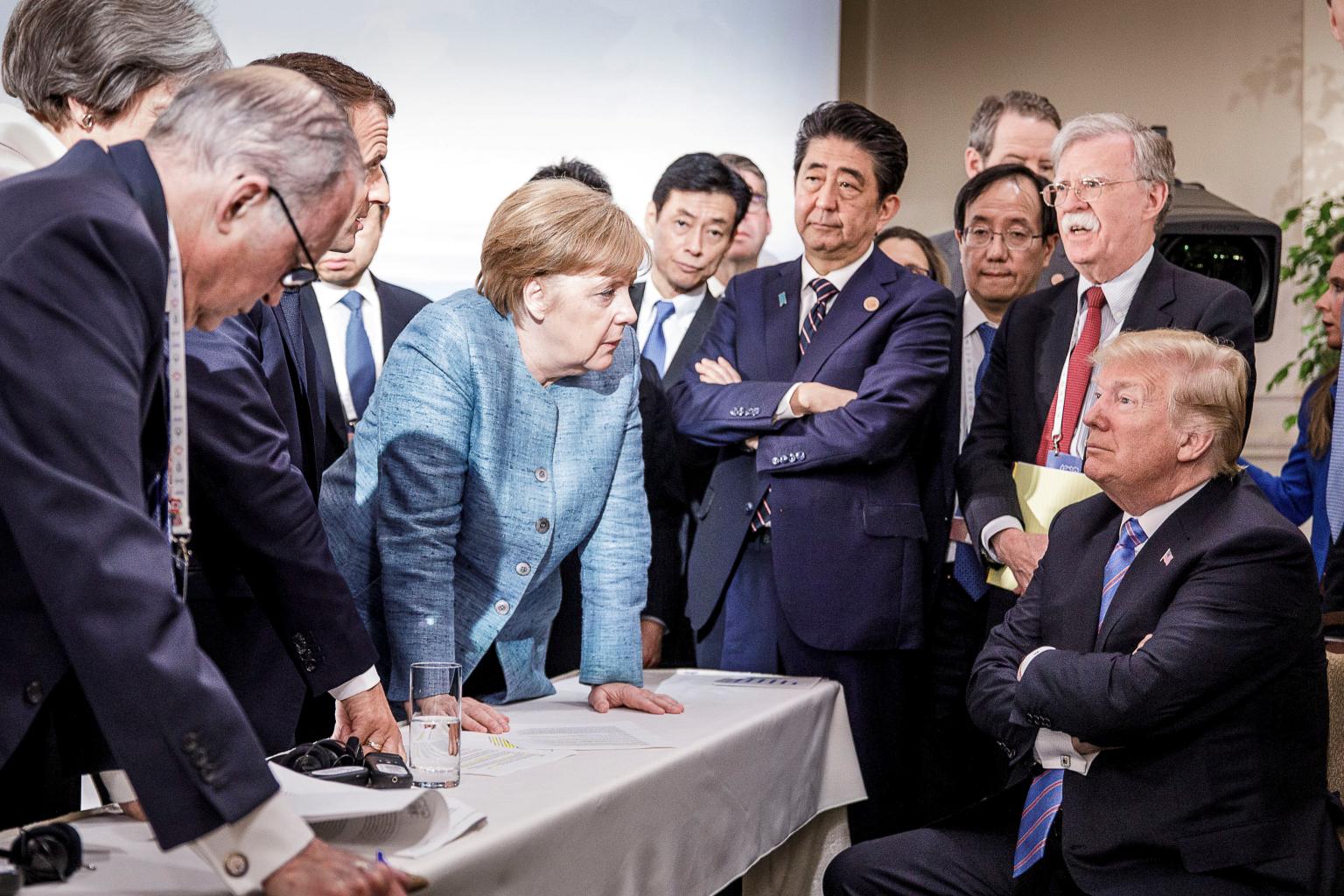 LA MALBAIE, Quebec -- The Group of Seven leaders came to their summit in Canada braced for battle, and while everyone had smiles ready for the cameras, behind the scenes U.S. President Donald Trump delivered a “rant” and recriminations on trade to U.S. allies, leaving the once united club deeply divided.

Trade dominated the two-day summit that began on Friday with leaders of Germany, France, Japan, Canada, Britain and Italy returning to the topic repeatedly in meetings, at a lavish dinner and by a fireside pit late into the evening.

A photo tweeted by the German government spokesman, @RegSprecher, captured the mood, showing a seated Trump, arms crossed, surrounded by other leaders standing over him.

At what a French presidential official described as one “extraordinary” session on Friday, leaders who had vowed to confront Trump over his decision to impose tariffs on U.S. allies last week as part of his “America First” agenda, showered Trump with data one after the other.

Trump gave “a long, frank rant”, the official said, repeating a position he carried through the 2016 U.S. election campaign into the White House that the United States had suffered at the hands of its trading partners, with French President Emmanuel Macron pushing back on the assertion and Japanese Prime Minister Shinzo Abe chiming in.

It was a “a long litany of recriminations, somewhat bitter reports that the United States was treated unfairly,” said the French official, who spoke on condition of anonymity. “It was a difficult time, rough, very frank.”

The U.S. president did not appear to be listening during some of the trade presentations, another G7 official familiar with the meeting said.

White House officials did not immediately respond to requests for comment on the characterizations by these officials of Trump’s remarks or attention to the presentations.

Trump himself told reporters on Saturday that the summit was not contentious and called his relationship with G7 allies a “10”.

Despite smiles and jokes for the cameras, the tension among the leaders was clear. At one point, German Chancellor Angela Merkel was seen having a brief, intense one-sided conversation with a stony-faced Trump on Friday.

On Saturday, Canadian Prime Minister Justin Trudeau sniped about “stragglers” after Trump was late to a breakfast session on gender equality. Trump left the summit early for Singapore, where he will meet North Korean leader Kim Jong Un next week.

One scene at the very beginning of the gathering of presidents and prime ministers of the biggest industrialized nations set the mood for facing the brash Trump.

He arrived at La Malbaie, the scenic luxury resort on the banks of the St. Lawrence River in Quebec, as the four European leaders and the two EU heads were huddled together in a room to coordinate their strategy. The noise of Trump’s helicopter landing was so loud they had to stop talking for a while, in a scene one official compared to the opening from the U.S. television series M.A.S.H.

“The EU understands that the only way with Trump is strength,” said one European official. “If you give in now, he will come back tomorrow for more.”